Folks, this was done to tank the markets. This was done to resist President Trump. This was done to screw over the American worker. The Senate has a $1.6 trillion Wuhan coronavirus bailout package that Democrats co-wrote. They filibustered it on Sunday night. We all know why they’re doing this. This isn’t a secret. The Dow Jones is down some 600 points as we speak and now, they’re trying to logroll stuff that is unrelated to this pandemic. Rep. James Clyburn (D-SC) said this move is to shift the economic agenda more to the progressive Left’s vision. Guy wrote up the laundry list the left wants right now. And now, as Cortney wrote, they blocked the bailout package again. They hope to have a deal by the end of the day (via Politico):

Senate Democrats are rushing to finish negotiations with the Trump administration on a massive $1.6 trillion-plus emergency rescue package as the coronavirus spreads and markets continue to dive.

Senate Minority Leader Chuck Schumer (D-N.Y.) said on the Senate floor Monday afternoon that he was confident that negotiators will reach a deal soon.

But Republicans argued Democrats are stalling the proposal and are adding extraneous provisions onto the package that have nothing to do with the coronavirus outbreak, like fuel emission standards for airlines and more wind and solar tax credits.

“Democrats won’t let us fund hospitals or save small businesses until they get to dust off the Green New Deal,” a visibly irritated McConnell said. “This has got to stop. And today is the day it has to stop. The country is out of time.”

Tensions on the Senate floor reached new heights Monday afternoon as lawmakers rushed to complete the deal, with Republicans berating Democrats for the delays.

“I cannot believe objections to proceeding to this package,” said Sen. Susan Collins (R-Maine), who worked on its small business provisions. “Is this package perfect? No but that’s why negotiations are going on … Time is not on our side.”

Note that for all the complaints about how we can’t trust Mnuchin with the power over this program, the language giving him the authority in the Republican Senate Bill and Dem House Bill is exactly the same (because that’s how these programs are administered). 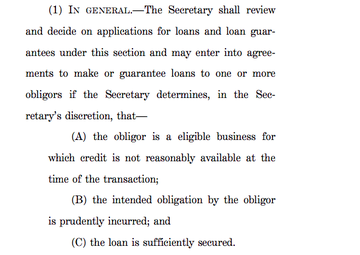 Schumer Sunday: “to my delight and surprise there has been a great deal of bipartisan cooperation” https://www.realclearpolitics.com/video/2020/03/22/schumer_democratic_coronavirus_financial_relief_plan_is_unemployment_insurance_on_steroids.html …

Senate Minority Leader Chuck Schumer talks to CNN’s Wolf Blitzer about the effort to pass a bipartisan stimulus package to relieve the economic impact of the coronavirus pandemic. “We need a Marshall…

MCCONNELL: “We were this close. But then, the Speaker flew back from San Francisco. Suddenly, the Senate’s serious bipartisan process turned into this left-wing episode of supermarket sweep.”

Timeline below shows why PELOSI owns this obstruction https://www.gop.gov/this-is-on-nancy-pelosi-full-stop/ … 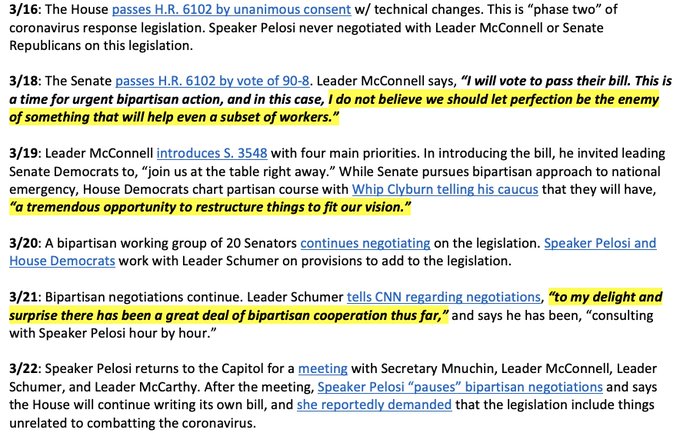 Source writes, “not only are these completely unrelated to the coronavirus epidemic, they could prevent companies from participating in the loan programs altogether—directly causing unnecessary layoffs.”

Reagan wrote up the Collins blow up, and it was a time when the chamber boiled over.

“C’mon, this is bulls**t,” shouted Sen. Tom Cotton (R-AR). Lisa DeJardins of PBS Newshour was the only reporter in the chamber when this all went down.

As the only reporter in the Senate chamber for all that – let me just say WOW.

I’ve seen a lot, never seen anything quite like that.

Need to send notes to my newsroom, etc. Then will tweet more.

– Sen. Collins asked to speak, Schumer objected.
– Sen. Cotton shouted, “C’mon”, “This is bullshit!”
– Collins walked thru her row to Schumer – stood a foot or so away, finger pointed, exclaimed, “you are objecting to my speaking? This is appalling!”

Lisa Desjardins
– Republicans were now nearly all standing, loudly voicing anger.
– Schumer was trying to sort out, with his staff, how to communicate what he was doing. (He wanted to ask about schedule and offer some votes but notably seems he had not signaled that to the GOP beforehand).

Lisa Desjardins
– Sen. Cotton, standing near the well, presses the point and in an oddly “I am Spartacus!” moment, asks to speak himself.

Lisa Desjardins
Schumer is finally able to communicate he wants to ask about the question and move some voice votes.

McConnell, there w/ no staff next to him, slows it down and seems he had no warning of Schumer’s move.

So on the fly they agree to two voice votes and an hour of debate.

She wrote when Schumer objected to her speaking, she walked through her row to the Senate Minority Leader, finger pointed, and said, “you are objecting to my speaking? This is appalling.”

On Schumer’s part, it seemed like there was just a lack of communication, which led to this blowup.

“Schumer was trying to sort out, with his staff, how to communicate what he was doing,” wrote Desjardins. “He wanted to ask about schedule and offer some votes but notably seems he had not signaled that to the GOP beforehand.” Sens. Cotton and Bill Cassidy (R-LA) all tried to speak in what DesJardins called an “I am Spartacus” moment. All got objected by Schumer. And after all that, it seems Schumer wanted was some voice votes. Two voice votes and an hour of debate. But let’s be serious, this was done to again hobble the markets, and show the Democratic Party’s left flank that “resist” is still alive and well. And these nutcases, like China, would rather see the U.S. economy burn than allow Trump to contain this and get things rolling again.