As more and more Americans fall ill with the coronavirus and President Trump warns it will peak sometime in April, states nationwide are moving quickly to implement travel restrictions on people coming in from other parts of the country, regulating the interstate travel of Americans to an extent not seen in modern American history. Rhode Island was one of the first states to implement restrictions on Americans coming from a coronavirus hot spot by mandating that any New Yorkers traveling to the state self-quarantine for 14 days.

“I want to be crystal clear about this: If you’re coming to Rhode Island from New York you are ordered into quarantine,” Rhode Island Democratic Gov. Gina Raimondo said at the time. “The reason for that is because more than half of the cases of coronavirus in America are in New York.”

The U.S. Navy hospital ship “Comfort” passes in front of the Statue of Liberty as it arrives in New York, U.S., on Monday, March 30, 2020. The naval hospital has 1,000 beds and 12 operating rooms. The Comfort will not treat Covid-19 patients, but rather handle overflow or acute trauma cases and other urgent needs, Acting Navy Secretary Thomas Modly told reporters at a briefing last week. Photographer: Michael Nagle/Bloomberg via Getty Images

That restriction led New York Democratic Gov. Andrew Cuomo to threaten to sue as the Rhode Island National Guard went door-to-door in the state to tell New Yorkers about their mandatory 14-day quarantine.

“I understand the goal … but there’s a point of absurdity, and I think what Rhode Island did is at that point of absurdity,” Cuomo said. “We have to keep the ideas and the policies we implement positive rather than reactionary and emotional.”

Raimondo responded: “[H]e’s welcome to sue if he likes. I think he would have a very hard time because I’m on firm legal ground.”

In addition, starting immediately, any person coming to RI by any mode of transportation after visiting any other state for a non-work-related purpose must self-quarantine for 14 days. This restriction will not apply to public health, public safety or healthcare workers.

But Rhode Island later stopped singling out New York — which both statewide and in its largest city, New York City, has seen by far the most coronavirus cases of anywhere in the U.S. — by expanding the order to cover “[a]ny person coming to Rhode Island from another state for a non-work-related purpose.”

This happened as a larger number of states have decided to impose quarantines on visitors from other states, with the coronavirus crisis likely to last at least another month after President Trump over the weekend extended the White House’s social distancing guidelines through April 30.

Texas Gov. Greg Abbott, a Republican, announced Sunday that he would require visitors to his state from anywhere in Louisiana to self-quarantine for 14 days after previously mandating such a quarantine for travelers from New York, New Jersey, Connecticut and New Orleans. He also included air travelers from California, Washington state, Atlanta, Chicago, Detroit and Miami in the new mandatory self-quarantine.

While we love our visitors, we would ask that you not come visit while Montanans are watching out for one another by staying at home. Today I directed that travelers arriving from another state or country to Montana for non-work-related purposes undergo a 14-day self-quarantine. 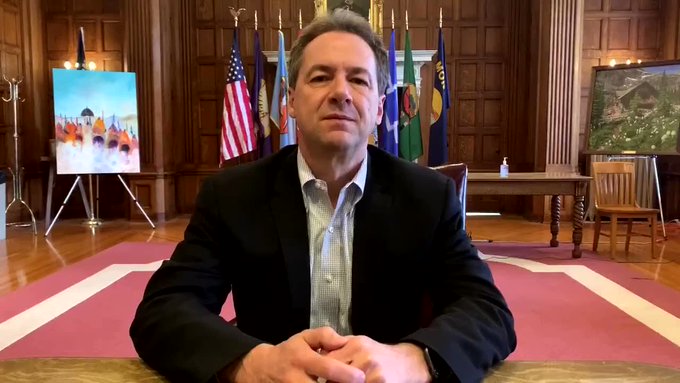 Taken together, these travel restrictions, which reach nearly every corner of the United States, are a nearly unprecedented limitation of Americans’ freedom of movement as every level of government is scrambling to prevent the spread of the coronavirus in the United States. Governors cannot legally prevent people, especially Americans, from entering their states. But they can discourage it by implementing a 14-day quarantine or similar measures and enforcing that with their state police or national guard. That appears to be what many states, in an effort to keep people infected with the coronavirus outside of their borders, have decided to do.

These drastic measures reflect the warlike posture both the federal government, which passed a $2.2 trillion stimulus bill to combat the economic effects of the coronavirus last week, and state governments, which have borne most of the responsibility for coordinating the response to the disease throughout the pandemic, are taking in their efforts to defeat the coronavirus.

The federal government nearly stepped in over the weekend when Trump said he was considering a quarantine on New York, parts of New Jersey and some of Connecticut as part of the efforts to curb the spread of the coronavirus. He later tweeted that such a quarantine was not necessary and the CDC later issued a travel advisory discouraging Americans from entering the region. More than 800,000 total coronavirus cases have been diagnosed worldwide with over 164,600 of those in the U.S. Nearly 3,200 Americans have died from the coronavirus with 1,342 of those in New York as of Tuesday morning.