At National Prayer Breakfast, Pelosi Watches as Trump Rips Her for Using Faith to Destroy His Presidency

The 68th annual National Prayer Breakfast on Thursday arrived at a celebratory time for President Trump, a day after he was finally acquitted in the Senate impeachment trial. The woman who launched the impeachment inquiry against him, House Speaker Nancy Pelosi, happened to give one of the invocations.

She took her seat onstage after the prayer, and just a few minutes later Trump took the podium, and absolutely ripped her for her “corrupt” attempt to remove him from office. She had no choice but to sit and listen.

CSPAN
President Trump: “I don’t like people who use their faith as justification for doing what they know is wrong. Nor do I like people who say ‘I pray for you’ when they know that that’s not so. So many people have been hurt and we can’t let that go on.”#NationalPrayerBreakfast 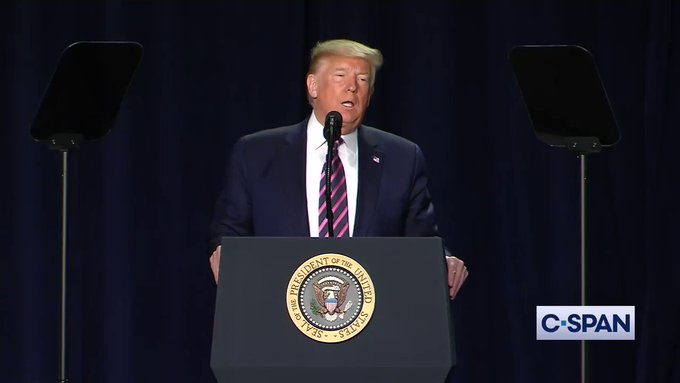 “I don’t like people who use their faith as justification for doing what they know is wrong,” he said. “Nor do I like people who say I pray for you, when we know that that’s not so,” he added. “So many people have been hurt and we can’t let that go on.”

We all know who he was talking about. Pelosi, you’ll remember, has often told the press that despite trying to impeach him, she “prays” for President Trump. It also sounded like a swipe at Sen. Mitt Romney (R-UT), who told his colleagues on Wednesday that his Mormon faith influenced him to vote to convict Trump.

I’m sure POTUS could feel the icy looks coming from his left.

But, he has reason to be peeved. Not only did Pelosi try to impeach him, but she dramatically tore up his State of the Union speech on Tuesday night.

He had the last laugh on Thursday, and proudly waved a few newspapers announcing his acquittal.

WATCH: At National Prayer Breakfast, President Trump holds up newspapers with headlines highlighting his impeachment acquittal by the US Senate. 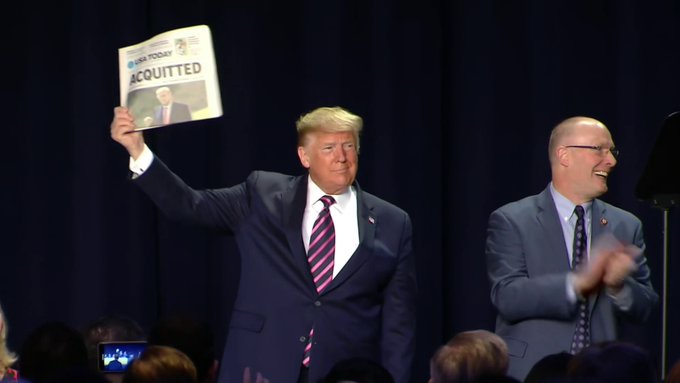 Trump proceeded to tout his administration’s efforts to defend religious freedom. But I suspect that part will be a bit overshadowed.