Rep. Adam Schiff (D-CA) appears to have “mischaracterized” a piece of evidence used in the Democrats’ impeachment investigation, Politico reports.

Melanie Zanona
Adam Schiff may have mischaracterized a piece of the Lev Parnas evidence from last week, according to unredacted documents obtained by @politico… The story >> https://www.politico.com/news/2020/01/21/schiff-parnas-trump-evidence-101832 …

s“In one section of the letter, Schiff claims that Parnas ‘continued to try to arrange a meeting with President Zelensky,’ citing a specific text message exchange where Parnas tells Giuliani: ‘trying to get us mr Z.’ The remainder of the exchange — which was attached to Schiff’s letter — was redacted,” Politico’s Melanie Zanona writes. “But an unredacted version of the exchange shows that several days later, Parnas sent Giuliani a word document that appears to show notes from an interview with Mykola Zlochevsky, the founder of Burisma, followed by a text message to Giuliani that states: ‘mr Z answers my brother.’ That suggests Parnas was referring to Zlochevsky not Zelensky.”

A Democratic official “didn’t dispute the suggestion,” according to Politico, but that source said the single letter “z” was most commonly used as a reference to Zelensky. A GOP aide interviewed for the story, meanwhile, called the assumption Schiff made “sloppy oversight work at best.”

Other Republicans were less charitable.

The more Schiff speaks to the American people, the more the support for impeachment is obliterated in the court of public opinion.

Another “bombshell” turns out to be a dud. Adam Schiff ought to prove he can manage basic facts before he tries to manage an #impeachment. Kudos to @seanhannity and @politico for bringing this mischaracterization of the Parnas evidence to light. 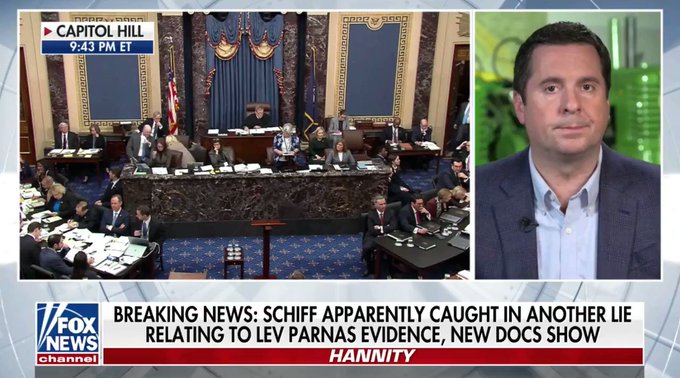 The opening paragraph of this story comes pretty close to a “Republicans pounce” kind of thing.

But the real story is that Adam Schiff, once again, has apparently lied about supposed evidence.https://www.politico.com/news/2020/01/21/schiff-parnas-trump-evidence-101832 …