All eyes were on moderate House Democrats in swing districts Wednesday night, after the first day of public hearings in the impeachment inquiry against President Trump wrapped up with no major revelations — but also highlighted weaknesses in Democrats’ key witnesses, who relied primarily on second-hand information and never once interacted with the president.

At one point in Wednesday’s hearing, Rep. Mike Quigley, D-Ill., even appeared to embrace hearsay testimony, claiming that “hearsay can be much better evidence than direct” and that “countless people have been convicted on hearsay because the courts have routinely allowed and created, needed exceptions to hearsay.” It was unclear which of those limited exceptions would apply to Wednesday’s testimony — and whether Quigley’s argument would persuade critical swing-vote Democrats.

The House is now comprised of 431 members, meaning Democrats need 217 yeas to impeach Trump. There are currently 233 Democrats, so Democrats can only lose 16 of their own and still impeach the president. 31 House Democrats represent more moderate districts that Trump carried in 2016.

Freshman Rep. Elissa Slotkin, D-Mich. — who flipped a GOP district in 2018 that Trump won by 7 points in 2016 — told Fox News that she was tentatively weighing all the evidence.

“My constituents expect me to make an objective decision,” Slotkin said as the hearings concluded, “not one based on an hour of testimony.” Slotkin went on to acknowledge that launching an impeachment inquiry was a “politically tough thing to do.”

“I’m not waking up in the morning looking for some golden poll,” Slotkin said, insisting that she would analyze all testimony carefully in the coming days.

Reports have emerged that, should Trump be impeached by a majority vote in the House, Senate Republicans might strategically hold a lengthy trial to “scramble” the 2020 Democratic presidential primary — including by requiring several of the contenders to remain in Washington to handle the trial. Trump is all but certain to be acquitted by the GOP-controlled Senate in the event of impeachment, given that a two-thirds vote is required in the Senate to remove the president. As the public hearing wrapped up on Wednesday, the panel voted 13-9, along party lines, to table a Republican motion to subpoena the whistleblower — signaling that not many minds had been swayed.

A GOP source close to the House Intelligence Committee told Fox News late Wednesday that Republicans have full confidence in counsel Steve Castor, and he will continue to lead the questioning in the next round of public impeachment hearings. GOP members were pleased with his questioning today, the source said.

The day offered one previously undisclosed allegation. Career diplomat William Taylor, the charge d’affaires in Kiev, offered testimony, for the first time, that the president was overheard by a member of his staff on July 26 asking EU Ambassador Gordon Sondland about “the investigations,” to which Sondland supposedly responded that “the Ukrainians were ready to move forward.” Taylor said that following Sondland’s call with Trump, the member of his staff asked what Trump thought about Ukraine.

“Ambassador Sondland responded that President Trump cares more about the investigations of Biden, which Giuliani was pressing for,” Taylor said, revealing new information from his prior testimony last month. “At the time I gave my deposition on October 22, I was not aware of this information. I am including it for completeness.” But, Republicans pointed out that Taylor’s testimony was unverifiable hearsay, several layers deep — and that Sondland has previously testified that Trump explicitly told him there were “no quid pro quo’s of any kind” with Ukraine, including one in which military aid would be conditioned on any politically motivated investigations.

“‘Ambassador Taylor recalls that Mr. [Tim] Morrison told Ambassador Taylor that I told Mr. Morrison that I had conveyed this message to Mr. [Andriy] Yermak on September 1, 2019, in connection with Vice President Pence’s visit to Warsaw and a meeting with President [Volodymyr] Zelensky,'” Ohio GOP Rep. Jim Jordan said, incredulously reading a statement from Sondland.

“We’ve got six people having four conversations in one sentence, and you just told me this is where you got your ‘clear understanding,'” Jordan continued, as Taylor appeared to laugh. “Ambassador, you weren’t on the call, were you? You’ve never talked to Chief of Staff [Mick] Mulvaney? You’ve never met the president. … And you’re their star witness?”

Even CNN analyst Jeffrey Toobin noted that Democrats had a “problem,” in that their key witnesses Wednesday had never directly interacted with Trump. “And, that’s a problem if you’re going to impeach the president,” Toobin said.

Jordan also reminded viewers that President Obama had declined to provide lethal aid to Ukraine, even after Russia’s invasion. Trump, on the other hand, eventually provided Javelin missiles. And, Ukraine’s president has said he felt no pressure, improper or otherwise, from the Trump administration to engage in any investigations.

Trump, for his part, said he was too busy to watch on Wednesday and denied having such a phone call. “First I’ve heard of it,” he said when asked.

At a news conference with Turkey’s leader, Trump vowed to release another transcript of an earlier call with Ukraine on Thursday. He called Democrats’ efforts a hopeless “witch hunt.”

Media observers questioned whether the proceedings ultimately would sway any opinions, or make things any easier for moderate Democrats. ABC News’ George Stephanopoulos mused on-air, “part of me is wondering, what do facts matter anymore in these debates?”

Meanwhile, Christian Jacobs, 50, sat in a beach bar in St. Petersburg, wearing a fedora and reluctantly watching the drama on television, as The Associated Press put it.

“I did not want this,” Jacobs, a Democrat, said, glancing at the TV and vaping. He said he had been leaning closer toward impeachment.

“I’m so afraid, left to his own devices, what else he may do,” Jacobs said of Trump.

Anthony Harris, cutting hair in Savannah, Georgia, had the hearing on in his shop, but he said, “It’s gotten to the point now where people are even tired of listening.”

Lawmakers largely signaled that the hours of partisan back-and-forth did not appear to leave a singular moment etched in the public consciousness the way the Watergate proceedings or former President Clinton’s impeachment did.

Taylor and Kent had defied White House instructions not to appear. Both received subpoenas.

They were among a dozen current and former officials who already testified behind closed doors. Wednesday was the start of days of public hearings expected to stretch into next week.

All day, the diplomats testified about how an ambassador was fired, the new Ukraine government was confused and they discovered an “irregular channel” — a shadow U.S. foreign policy orchestrated by the president’s personal lawyer Rudy Giuliani which raised alarms in diplomatic and national-security circles.

For their part, Republican lawmakers observed that the president — not unelected career bureaucrats — dictated foreign policy. At its core, the inquiry has stemmed from Trump’s July 25 phone call when he asked Zelensky for “a favor.”

After the call – Ambassador Taylor met with Ukrainian President Volodymyr Zelensky the VERY NEXT DAY!

President Zelensky said, “The call was fine. I was happy with the call.” 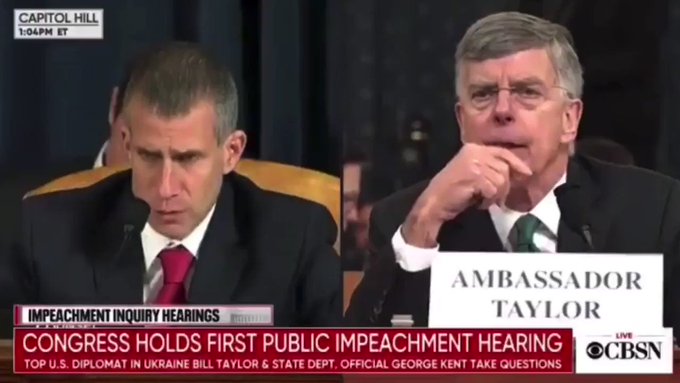 The White House already has released a transcript of the call, in which the two discussed past U.S. “support” for Ukraine, as well as Ukraine’s issues with corruption. On the call, Trump asked Kiev to investigate reports that Ukraine was involved in 2016 election interference. Later on, the president also mentioned former Vice President Joe Biden’s push to have Ukraine’s chief prosecutor fired, and suggested the country look into the matter. The call came a day after former Special Counsel Robert Mueller’s widely derided appearance on Capitol Hill appeared to leave Democrats’ hopes for impeachment dashed.