Let’s begin with a reminder that my positionon partisan blame after horrific acts of violence has been quite clear and consistent.  I believe it’s almost always grossly unfair, and a cheap political smear, to pin mass murder on mainstream ideological opponents, even by implication.  Leave it to Alexandria Ocasio-Cortez to make the least fair point in the dumbest and ugliest way possible.  Take it away, lady:

Rep. Alexandria Ocasio-Cortez (D-N.Y.) late Monday said that President Trump‘s divisive rhetoric on immigration was “directly responsible” for the mass shooting in El Paso, Texas that left at least 22 people dead. The freshman New York congresswoman made the comments while speaking at a vigil in Brooklyn for the victims of the shooting in El Paso and Dayton, Ohio, according to the New York Daily News. “I’m tired of the questioning if the president is racist. He is,” Ocasio-Cortez told a crowd of about 500 people, the newspaper noted.

The only person “directly responsible” for the Texas massacre is the right-wing, immigrant-hating white supremacist terrorist and doomsday environmentalist who perpetrated it.  Period.  And while I’ve been a frequent critic of President Trump’s language on any number of issues — and while it’s true that the killer’s manifesto mirrored some of Trump’s words and phrases (“invasion” and “fake news”) — it’s a very dangerous and dishonest game indeed to claim that heated political rhetoric is even partially responsible for acts of extreme violence.  On that score, let’s apply AOC’s ‘direct responsibility’ rubric to another recent event:

The 69-year-old armed man killed by Washington state police as he attacked a local Immigration and Customs Enforcement detention center Saturday sent a manifesto to friends the day before the assault in which he wrote “I am Antifa,” and was being lionized by members of the leftwing group as a “martyr.”…[Name redacted] was armed with a rifle and incendiary devices when he launched his assault on the Northwest Detention Center in Tacoma around 4 a.m. Saturday, according to the Tacoma Police Department. Employees reported he was throwing ‘incendiary devices’ and setting vehicles on fire and the first officers on the scene said he was wearing a sachet and carrying flares. [The assailant] was trying to ignite a propane tank when he was confronted by the officers, who opened fire. The Pierce County Medical Examiner’s office said he died of multiple gunshot wounds…Several friends of [his] said they received a manifesto from him Friday calling the facility “an abomination” and asking “those burdened with the wreckage from my actions” to “make the best use of that burden.”

Who or what may have inspired this unhinged zealot?

KIRO-7’s report included a link to the manifesto, where the attacker used the term “concentration camps” four times and referred to them as being “corporate for profit.” Ocasio-Cortez injected the rhetoric into the national political discussion last month after she made the dubious claim during an Instagram live video.

The bomber repeatedly cited AOC’s dreadful and widely-rebuked “concentration camps” formulation in his manifesto. Based on her own standard, which I reject, she is “directly responsible” for a violent armed attack. Will she accept blame? Will she turn herself in to authorities?  Lock her up.  Meanwhile, presidential candidate Elizabeth Warren effectively blamed Fox News for the horror in El Paso: We need to call it out: Fox News is a hate-for-profit machine that gives a megaphone to racists and conspiracists.

Setting aside a different network’s recent decision to give a megaphone to a bona fide white nationalist, Warren is in an uniquely bad position to be flinging mud at others on this front this week.  That’s because one of her own supporters shot nine people dead, and wounded dozens more early Sunday morning in Ohio.  I do not blame Warren (or any other leftists or socialists, whom the killer praised on social media) for his actions. We still do not know his motive, and it’s entirely possible that there was no political angle whatsoever to the that killing spree.  Some media figures are making this argument, as it congeals into a talking point:

The last reporter quoted — who falsely pretended that the Dayton shooter’s were more “neutral” than they plainly were — had in fact been retweeted by the killerseveral times.  He was likely totally unaware of this fact, but it’s a bad look when he’s basically spinning the guy’s views on national television.  In any case, I happen to agree that there’s a very important distinction between explicitly politically-motivated violence, and violence committed by someone who also happened to be a member of a political tribe.  The trouble with this point is that no such careful distinction would be made by most of the media, and virtually all of the Left, if the murderer happened to be an identifiable Trump fan or right-winger, regardless of any evidence regarding motive.

This is not a hypothetical proposition.  After former Congresswoman Gabby Giffords was shot and seriously wounded in a mass murder attack, the aforementioned forces aligned to create a deafening roar over right-wing rhetoric, Sarah Palin’s “target” map, and conservatives’ anger.  Politicians and media figures were blamed for ginning up a “climate of hate,” to the point that many in Congress switched to bipartisan seating for the State of the Union address, to signal civility and comity. It turned out that the shooter was a mentally ill young man obsessed with Giffords, with no political motive, and no ideological footprint at all.  Yet none of that stopped the Democrat-media-popular culture complex from blame-storming ferociously for weeks, uninterested in the actual facts.  The Narrative was too valuable, especially as it presented an occasion to bludgeon and silence opponents.

If Elizabeth Warren were a conservative, the usual suspects would be speculating about which elements of her platform and rhetoric helped fuel the Dayton shooter’s anger.   Given her often harsh and borderline-apocalyptic tone, she’d be accused of “fanning the flames” of hatred and paranoia.  And his beliefs, had they been right-wing, would’ve been evidence enough.  Instead, Warren is shamelessly playing the slanderous blame game (alongside other supposedly respectable lefties) on the El Paso bloodshed, confident that her own rules won’t be widely applied to her, vis-a-visthe monstrous acts of her own partisan supporter.  The double standards are so glaring, they’re undeniable — except among those who vigorously enforce and defend them.  Relatedly, may I remind you that after a hardcore leftist attempted to assassinate a baseball field full of GOP lawmakers, in the midst of Democrats screaming that a healthcare proposal would “kill” thousands of people, there was no ‘national conversation’ about progressive rhetorical excesses.  The media lost interest in the story mighty fast, too.  I’ll leave you with this, which I will likely be scolded for even noting: 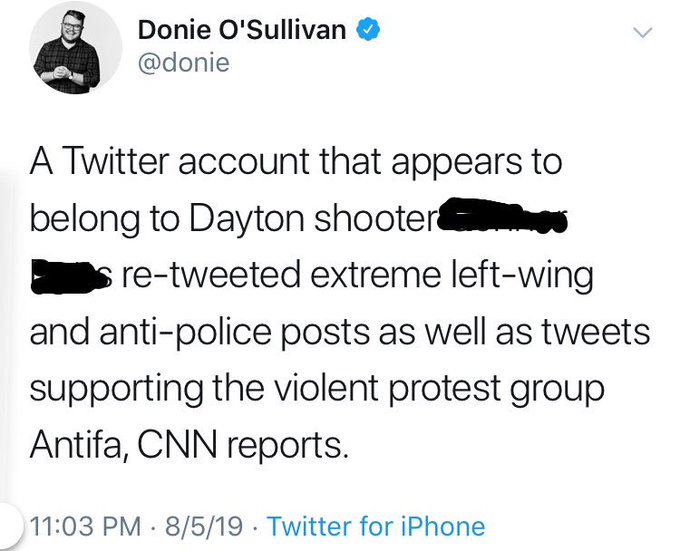 Only certain information is relevant and important, after all, and facts unhelpful to the Real Narrative are either buried or attacked.  By the way, there is some evidencethat the Dayton killings may well have been ideologically-inspired (as a twisted and irrational act of vengeance), at least in part.