The Trump Administration received even more positive news this morning, via the latest Gallup poll. President Trump’s approval rating continues to climb in the wake of his acquittal in the United States Senate; this morning’s poll has his job approval at 49 percent. The survey also shows an increase in self-identified Republicans, and a decrease in self-identified Democrats:

In addition, Gallup has seen an uptick in Americans identifying as Republicans – jumping to 32% (was 28%). Democrats were just 28% of respondents. 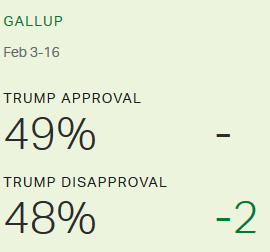 Much of this overwhelmingly positive approval can be attributed to economic approval from consumers. Americans are satisfied with the majority of the Trump Administration’s fiscal and regulatory policies, and the approval of Speaker Pelosi’s House of Representatives continues to plummet. From Gallup:

While Trump job approval and national satisfaction have improved since January, other measures are stable:

Economic satisfaction will be a key asset for President Trump at the ballot box in November, and competing with the Trump economy will be an uphill battle for the eventual Democratic nominee.