Well, the final vote in the House of Representatives was not a shocker. House Democrats’ lust to impeach President Trump on some shoddy quid pro quo allegation over military aid to Ukraine passed after nearly 12 hours of debate. As Katie wrote, the vote was 229-198-1. Rep. Tulsi Gabbard (D-HI), a 2020 Democratic candidate, voted present, while Reps. Jeff Van Drew (D-NJ) and Collin Peterson (D-MN) voted with Republicans against this witch-hunt.

Today was truly a clown show, with scores of Democrats trying to make the case that Trump is an existential threat to the United States. There was a lot of hot air. The evidence against Trump is the very definition of weak sauce. It’s so thin and so nakedly partisan that swing-state voters are sour on impeachment. This move by Democrats has increased the president’s popularity. It hasn’t moved the needle. In fact, the approval numbers for impeachment are now underwater. It has done the exact opposite of what Democrats had hoped, and this could be one massive in-kind contribution to the 2020 Trump campaign. Maybe within the leadership, they know this too, but they’re at the point of no return. They promised their base impeachment and it very well could allow Trump to cruise to re-election.

Knowing that the Republican Senate will dispense of their so-called evidence for impeachment, Speaker Nancy Pelosi has threatened to withhold transmitting the articles to the upper chamber. Senate Majority Leader Mitch McConnell (R-KY) has already rejected Senate Minority Leader Chuck Schumer’s (D-NY) parameters for the trial. McConnell slapped them down, along with cutting through the nonsense about his role in this Democrat-manufactured fantasy. He’s not going to be impartial.

“I’m not an impartial juror. This is a political process. There’s not anything judicial about it,” he said on Tuesday.

Knowing these articles face certain death with Senate Republicans, Pelosi and House Democrats now appear to be engaging in political extortion. Just watch. This is all about Senate Republicans rejecting Democratic calls for witnesses. That’s not how this works, lady. You folks, the House Democrats, decided what’s impeachable. The Senate holds a trial based on your work. And your work is total and complete nonsense.

Nancy Pelosi won’t commit to sending the House Democrats’ sham articles of impeachment over to the Senate.

Basically confirming what we’ve known all along this impeachment is a WITCH HUNT & A SHAM! 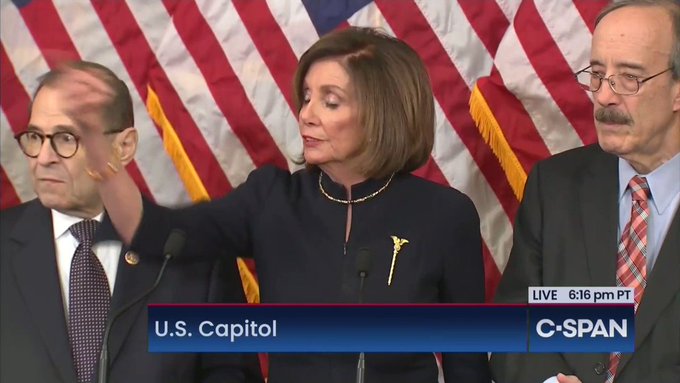 If Trump is so dangerous to the country and the world, why wait?!?!?! https://twitter.com/susanferrechio/status/1207485288592953347 …
!!!!!No decision on sending articles of impeachment to the Senate Says @SpeakerPelosi. “It’s up to the Senate to say what their rules will be.”

“We’ll decide what that dynamic is,” Pelosi told reporters after the vote. Politico has more:

Speaker Nancy Pelosi warned the House may not immediately transmit articles of impeachment to the Senate out of concerns Republicans won’t conduct impartial proceedings at a trial.

Pelosi refused to commit to any timeline for sending the articles, which is required to begin the impeachment trial.

“So far, we haven’t seen anything that looks fair to us,” Pelosi told reporters shortly after the House approved two articles of impeachment against Trump. “But right now, the president is impeached.”

Well, that’s not your call, Nancy. Your party is not the majority in the senate. We’re the majority. And we’re going to end this clown show. The longer you hang onto this the more popular Trump becomes and the more key swing states Democrats need to win in 2020 fall further out of reach. So, please, keep playing this game. Oh, and removing Trump from office requires 67 Senators. This just isn’t in the works.

The irony is thick. Democrats think Trump is dangerous and must be removed because he abuses his power, and we have Democrats abusing their power to try and get Trump removed from the Oval Office, possibly sending us into a constitutional crisis with these games. To save the Constitution, we have to destroy the Constitution. We have to shred parts and go around others. That’s quite the formula there for salvation, though one that could only come from the mind of a historically illiterate and petulant Democrat. They’re just giving us this election.