“Number one. Why did the Obama administration use opposition research funded by a political organization and filled with foreign dirt to surveil members of the Trump campaign? Number two, why was Lt. Gen. Michael Flynn unmasked by Obama’s Chief of Staff? By the former Vice President Joe Biden, by Susan Rice, by the Treasury Secretary? This is extraordinary. If it were political appointees in the Trump administration I can guarantee you I’d have questions in my inbox right now but apparently Obama’s spokesperson does not,” McEnany said. “Why was Flynn’s identity leaked in a criminal act? It is a criminal act to leak the identity of Michael Flynn to the press but it happened. Where are the questions to Obama’s spokesperson? Because my team would be running around this building if this had happened under the Trump administration.”

“Why did the DOJ’s Sally Yates learn about the unmasking form President Obama? So much for going by the book as Susan Rice said three times,” she continued. “And finally, question number five, why did James Clapper, John Brennan, Samantha Power and Susan Rice privately admit under oath they had no evidence of collusion while saying the opposite publicly.”

Before leaving the lectern, McEnany reminded the White House Press Corps it’s a long weekend, so they’ll have plenty of time to look for the answers.

Watch White House @PressSec lay out a series of questions that “any good journalist” would ask about why Lt. Gen. Michael Flynn was unmasked. 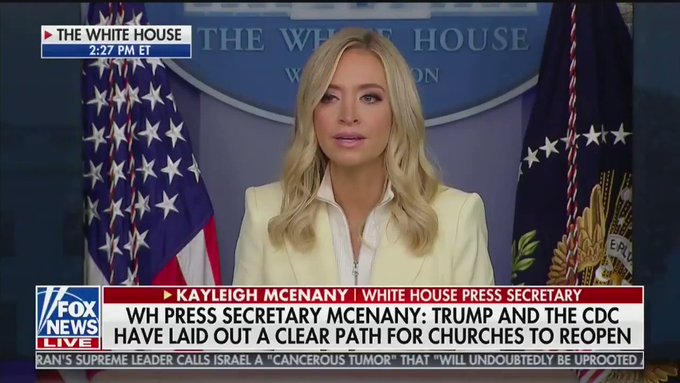