Sprawling lines were forming overnight in the Jersey Shore destination of Wildwood in anticipation of President Trump’s campaign rally scheduled for late Tuesday, in a show of support by Trump’s faithful amid the bruising impeachment fight back in Washington. The scene is striking considering Jersey’s political reputation as a blue state. But as Rep. Jeff Van Drew suggested Tuesday morning, the southern part of the state where Trump is heading may be more MAGA-friendly.

“South Jersey’s forgotten about sometimes,” said Van Drew, a former Democrat who switched parties to become Republican after the House impeachment vote that he opposed. He represents much of South Jersey and plans to accompany Trump Tuesday night — and pocket a presidential endorsement in the process. “There are people that are excited, homemade signs, all kinds of activities, people are camping out, just thousands and thousands of people,” he said on “Fox & Friends.” He claimed over the weekend it was his understanding that 100,000 ticket requests had been submitted, for a venue that holds 7,500. The actual number of rally attendees is unclear, though the campaign reportedly will set up large TVs outside for the overflow crowd to watch.

Trump campaign officials gleefully shared video of the crowds lining up overnight, hours before the rally is scheduled.

“Welcome to 2 am the night BEFORE [a Trump] rally! Impeach this,” campaign Press Secretary Kayleigh McEnany tweeted, along with a video of bundled-up Trump supporters in American flag-adorned attire.

The defiant challenge is a preview of what’s to come, with the president all but certain to use his appearance on the boardwalk to strike at his political targets with the precision of a seasoned Skee-Ball bowler.

Kayleigh McEnany
Welcome to 2 am the night BEFORE an ⁦@realDonaldTrump⁩ rally! 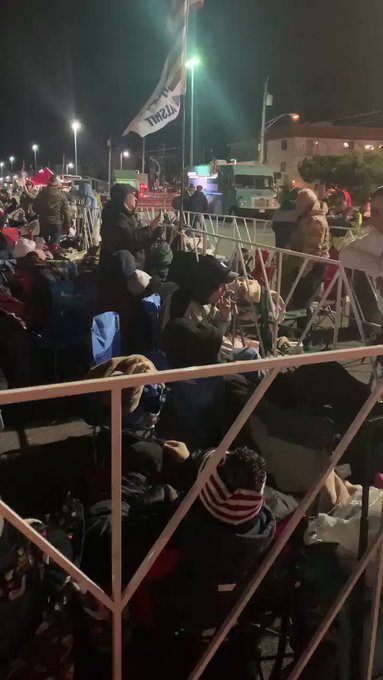 Thousands of @realDonaldTrump supporters are already in line for tomorrow’s #KeepAmericaGreat rally in Wildwood, New Jersey 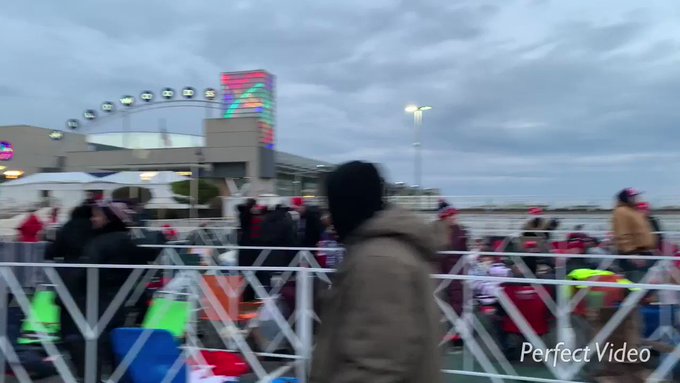 MUST WATCH: President Trump doesn’t take the stage in Wildwood, New Jersey for another 25 HOURS!

This is what the line looks like RIGHT NOW!#TrumpRallyWildwood 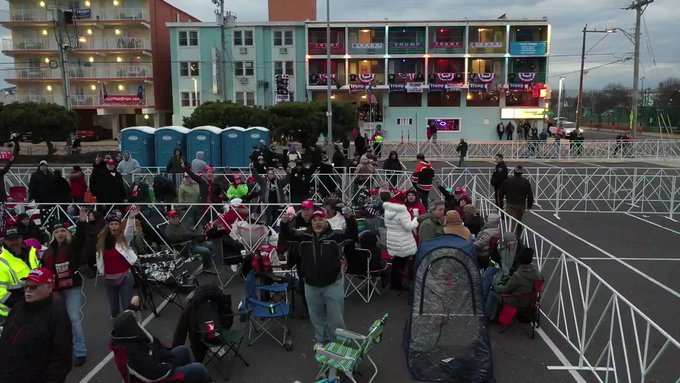 Counterdemonstrations are also being planned. Cape May County Indivisible said on Facebook that nearly 30 groups would assemble to “peacefully protest” the rally.

“We feel a moral obligation to show up and take a stand, rejecting the racism, bigotry, misogyny, violence, and corruption of this administration,” they said in a statement.

Martin Luther King III is expected to speak at that demonstration. Other Democratic groups also are planning a protest.

The rally comes as Trump’s Senate impeachment trial continues, with his defense team poised to wrap up opening arguments shortly before the rally begins.

The president faces two articles of impeachment – alleging abuse of power and obstruction of Congress – for his administration’s efforts to pressure Ukraine to launch an investigation of 2020 Democratic presidential candidate Joe Biden’s dealings in the country and other matters, while withholding U.S. aid. Trump denies any quid pro quo, but the saga took another turn this week when reports surfaced that ex-national security adviser John Bolton’s forthcoming book claims Trump linked the aid to the sought-after Biden probe. The aid was eventually delivered, amid internal concerns about the holdup.