Iranian military leader Qasem Soleimani is dead, struck down by a U.S. airstrike last Thursday. And his reign of terror dies with him. Soleimani had helped orchestrate attacks on coalition bases in Iraq, including one in December that killed a U.S. contractor and injured several other U.S. troops. According to U.S. intelligence, he had been planning another imminent attack on the U.S. before he met his fate last week.

Nikki Haley
“The only ones mourning the loss of Soleimani are our Democrat leadership and Democrat Presidential candidates.” 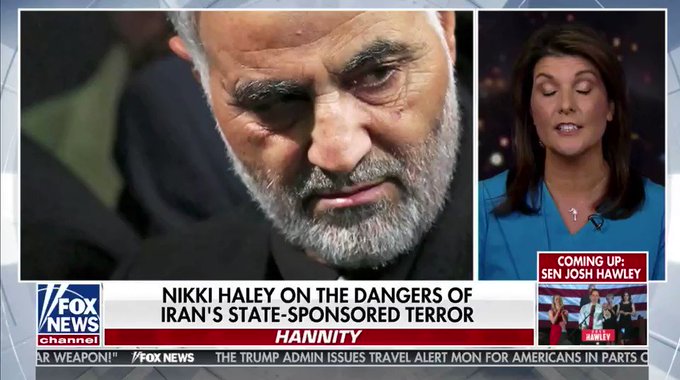 Haley was criticized on Twitter for that statement, but take a look at what some prominent Democrats have been saying and you’ll understand where she’s coming from. More often than not Democratic leaders have seemed eager to use this military victory to once again question President Trump’s decision making.

House Speaker Nancy Pelosi and Senate Minority Leader Chuck Schumer both accused Trump of circumventing constitutional guidelines to take out Soleimani, which she described as “a provocative and disproportionate military airstrike.” Pelosi took the opportunity to introduce her War Powers Resolution “to limit the President’s military actions regarding Iran.”

The measure “reasserts Congress’s long-established oversight responsibilities by mandating that if no further Congressional action is taken, the Administration’s military hostilities with regard to Iran cease within 30 days,” Pelosi said in her pitch to her Democratic colleagues.

Alexandria Ocasio-Cortez
Last night the President engaged in what is widely being recognized as an act of war against Iran, one that now risks the lives of millions of innocent people.

Now is the moment to prevent war & protect innocent people – the question for many is how, publicly & Congressionally:

Not to be outdone, Sen. Bernie Sanders (I-VT), who’s running to be the 2020 Democratic presidential candidate, compared the killing of Soleimani to Russian President Vladimir Putin “assassinating dissidents.”

No one else in the world is standing up for Soleimani, Haley continued, “because they knew that this man had evil veins, they knew what he was capable of, and they saw the destruction and the lives lost based from his hands.”

Iranian-backed militia members and supporters attacked the U.S. embassy in Iraq last week, but quickly retreated in the face of U.S. reinforcements.

The ayatollah is “crying today” because of President Trump’s decisive leadership, Haley said. “Iran is having to regroup,” she added. “Make no mistake they’re shaking in their boots.”