UPDATE: ABC News responded to Project Veritas’ story by denying that the network killed the alleged Epstein story. The network claims Robach’s original reporting did not meet editorial standards and could not be verified. Anchor Amy Robach claims this clip was simply due to a “private moment of frustration.”

Robach: “I was caught in a private moment of frustration. … In the years since no one ever told me or the team to stop reporting on Jeffrey Epstein” 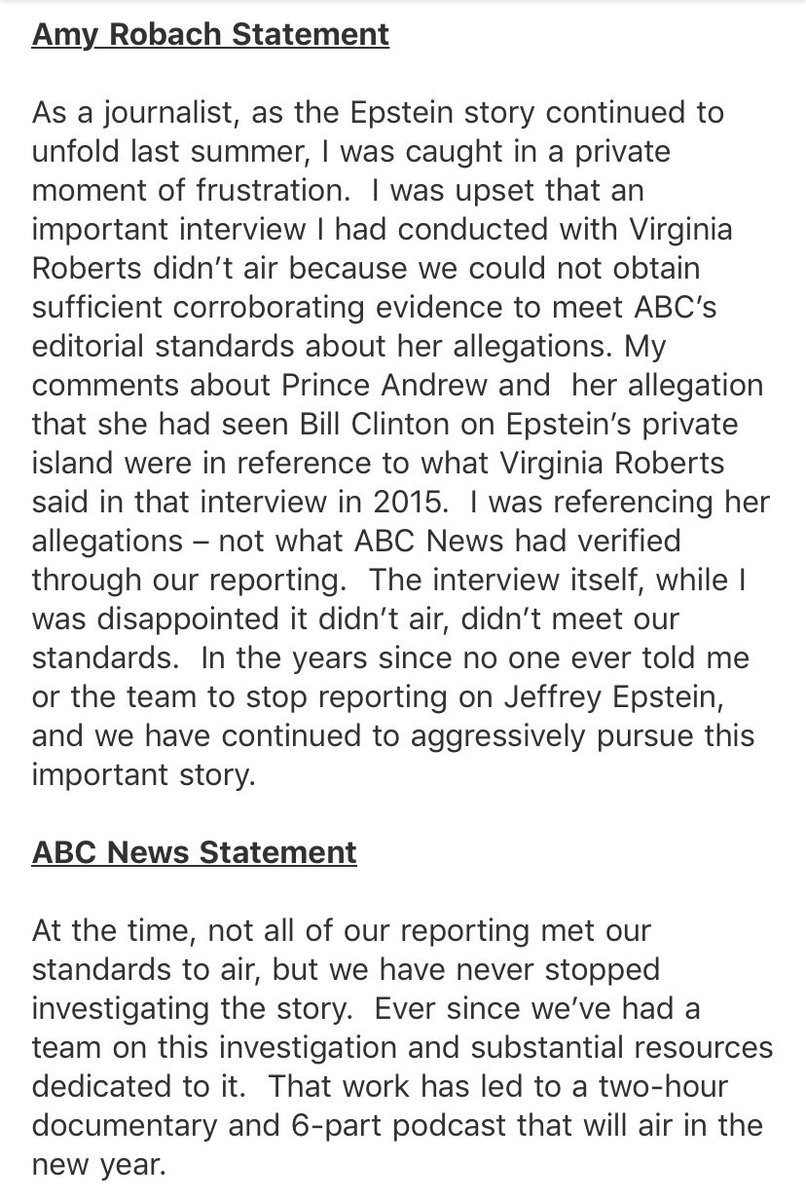 ORIGINAL: Project Veritas’ James O’Keefe released another tape that was leaked to the watchdog group from a whistleblower inside a major network newsroom. On Tuesday, the investigative journalism outlet exposed ABC News for allegedly spiking a story implicating heinous pervert and now-dead child molester Jeffrey Epstein. In the video seen at the bottom of this post, O’Keefe’s tape reveals ABC News 20/20 co-anchor and Good Morning America guest anchor Amy Robach lamenting that network higher-ups killed a story in 2016 she had implicating Harvard law professor Alan Dershowitz, former President Bill Clinton, and members of the British Royal Family regarding Epstein’s sex trafficking. More shockingly, Robach admits that she believes Epstein was killed because of how much blackmail he had on so many various people.

Robach made the comments to her producer sometime in late August, around the same time NPR released a story alleging that ABC News squashed a story about Epstein in order to protect the rich and powerful. Epstein was a mysterious billionaire and convicted pedophile who allegedly ran an illegal and prolific underage prostitution ring catering to the ultra-wealthy and government officials from around the world. He has been accused of pimping and recruiting young girls and forcing them to have sex with hundreds of men. His private island is where most of the alleged rapes occurred as well as on his airplane, notoriously nicknamed “The Lolita Express.”

“I’ve had the story for three years. I’ve had this interview with Virginia Roberts, we would not put it on the air. First of all, I was told ‘who’s Jeffrey Epstein? No one knows who that is this is a stupid story’,” Robach said exasperatingly to her producer.

“Then the Palace found out that we had her whole allegations about Prince Andrew and threatened us a million different ways,” she said regarding the British Royal Family. Virginia Roberts Guiffre has long alleged that she was forced to have sex with Prince Andrew while underage on multiple occasions. The two are photographed together, but the Royal family has long denied these claims.

“We were so afraid we wouldn’t be able to interview Kate or Will, I think that also squashed the story,” she said in reference to Kate Middleton and her husband Prince William.

“And then Alan Dershowitz was also implicated because of the claims. (Roberts Giuffre) told me everything. She had pictures she had everything. She was in hiding for 12 years we convinced her to come out we convinced her to talk to us. It was unbelievable what we had. Clinton — we had everything. I tried for three years to get it out, to no avail,” Robach continued. “And now it’s all coming out and it’s like ‘these new revelations.’ And I freaking had on all of it.  I’m so pissed right now like every day I get more and more pissed. Because I’m just like ‘oh my god, we…what what we had was unreal’. Other women backing it up… Brad Edwards the Attorney, three years ago, saying like like there will come a day where we will realize  Jeffrey Epstein was the most prolific pedophile this country has ever known. I had it all three years ago.”

It has been alleged that Dershowitz also had illicit ties to Epstein.  Epstein reportedly died in July via suicide in a New York federal prison. However, the circumstances surrounding his death were very suspicious — sleeping guards, broken cameras, seemingly physically impossible suicide with a paper thin bed sheet while on suicide watch. Robach says she absolutely believes he was killed by someone.  “Yes I do. Because made his whole living blackmailing people. Yeah there were a lot of men in those planes, a lot of men who visited that Island, a lot of powerful men who came into that apartment,” Robach said. “I knew immediately,” Robach said regarding his death and her belief he was killed. “And then they made it seem as though he made that suicide attempt two weeks earlier. His lawyers claimed that he was roughed up by his cellmate around the neck, that was all like to plant the seed and then that’s why I really believe it like really believe it.”

Robach also claims that she had proof that Epstein’s righthand woman, Ghislaine Maxwell, would recruit the girls for the sex operation. “I had all sorts of stuff on her too. I love it. I really I’m like it’s so funny to hear everyone say her name, because I’m like oh my god. And everybody’s like ‘who’s that? who cares?’ I kept getting that, ‘who cares um she knows everything? She knows. She knows. She should she should be careful as  well she was his like, she went out and recruited all of these girls. She should watch her back because if she goes…I mean I’d have like security guards all around me,” Robach said hinting that Maxwell could be murdered.

Many have argued that members of the mainstream media worked to cover up Epstein’s various ties to powerful politicians. Robach claims she had this story ready to go in 2016. According to her, it would have implicated Bill Clinton as well, and therefore would have potentially caused even more headaches for his wife Hillary Clinton’s presidential campaign. Robach also says she thinks the network squashed the story because ABC was afraid it would have hurt their chances for an interview with members of the Royal Family. This raises the question, was ABC News interested in pursuing the truth about Epstein or were they merely worried about their bottom line? How should they be trusted after this?