Shut The Circus Down: Is This the ‘Game Over’ Moment for These Trump-Ukraine Impeachment Hearings?

U.S. Ambassador to the European Union Gordon Sondland is done on the Hill. The hours-long testimony he offered related to the House Democrats’ impeachment crusade. They’re desperate to impeach President Trump over this quid pro quo allegation that so far has been denied by multiple witnesses. The Democrats have got nothing, nothing but presumptions. That’s not evidence. Sondland gave a lengthy opening statement that was around 23 pages long. And after all that, Sondland said that the aid to Ukraine was never tied to a corruption probe into the Biden family.

You see, this whole circus was erected thanks to a whistleblower complaint by a reported CIA agent who is also a registered Democrat. The allegation is that Trump threatened to withhold aid from Ukraine unless they looked unto Hunter Biden’s position at Burisma, a Ukrainian energy company, despite having zero experience. He was there making $50,000 a month. The allegation with that arrangement is that Hunter was there to sell access to top Obama officials; he secured his cozy position here in 2014.  This person had worked with a 2020 Democratic candidate and had contact with Rep. Adam Schiff’s (D-CA) staff prior to filing the complaint. Schiff knew the contents. Schiff might know the whistleblower. He’s kept the latter under a shroud of protection. I mean talk about collusion, deep state-Democrat collusion. mAnd after all the Democratic hyperventilating, Sondland said that he was not told that the aid negotiations were tied to these overtures for a corruption probe. Also, Ukraine got military aid. There was no quid pro quo. Cortney wrote about this earlier this morning, where she noted that Sondland said, “I’ve never heard from President Trump that the aid was conditioned on the investigations.”

Wow.@RepMikeTurner: “Mr. Sondland, let’s be clear: no one on this planet—not Donald Trump, Rudy Guiliani, Mick Mulvaney, Mike Pompeo—no one told you aid was tied to political investigations, is that correct.”

“If your answer’s YES, then the Chairman is wrong and the headline on CNN is wrong.

“NO ONE on this planet told you that President Trump is tying aid to investigations: yes or no?” 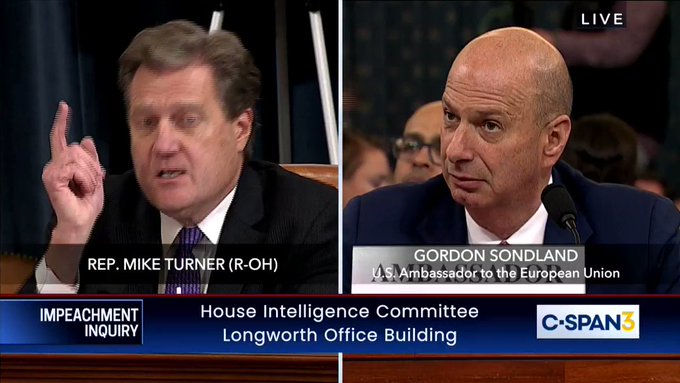 The most important quote out of this hearing so far:

Sondland: “I’ve never heard from President Trump that the aid was conditioned on the investigations.” He reached this conclusion on his own.

So, in short, yet another witness who can’t testify to the Democrats’ accusations. 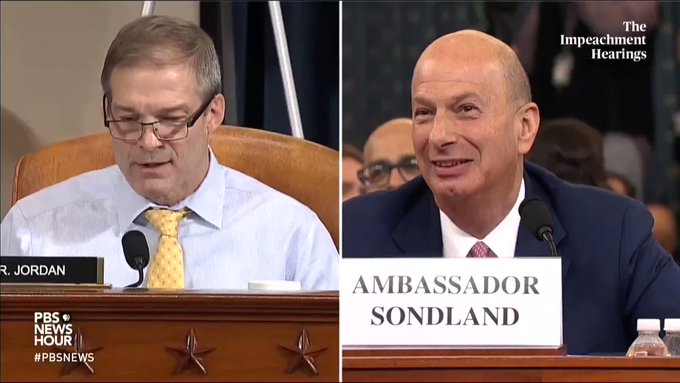 Your reminder of what that testimony was… in Gordon Sondland’s own words:

[Nothing] “…other than my own presumption.” 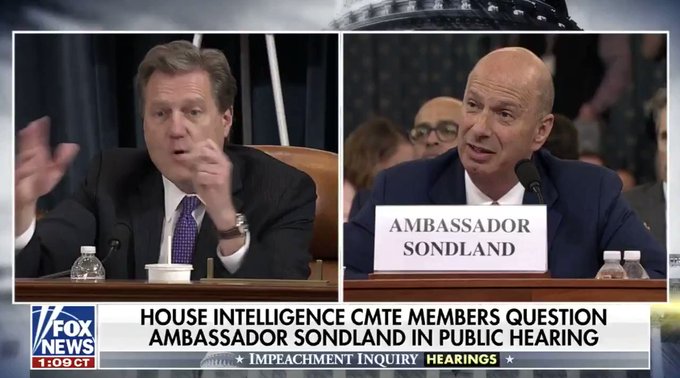 Sondland: “I have said about 19 times, [President Trump] did not ask me about the Bidens.” “When he asked about investigations, I assumed he meant the company.”

Amb Sondland: No one on this planet told me there was a quid pro quo

Rep. Mark Meadows (R-NC) said this admission was the “game over” moment in these proceedings. Rep. Jim Jordan (R-OH) grilled Sondland as to why he didn’t include these remarks in his opening remarks, specifically the part where Trump said he didn’t any anything from Ukraine, no quid pro quo, while adding that he wanted President Volodymyr Zelensky to implement what he ran on which was greater transparency in government. 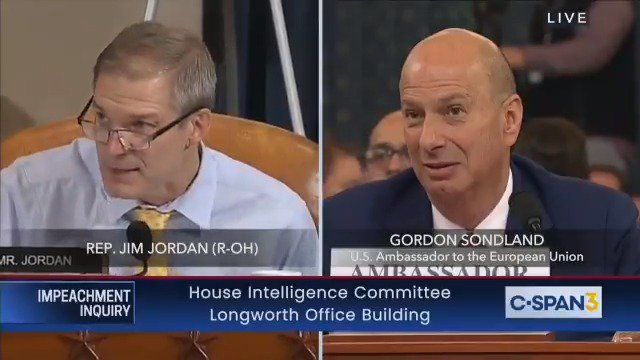 Sondland said this omission was done on purpose.

And that’s the key, folks. Trump didn’t want anything from Ukraine, no quid pro quo—and yet, this mayhem continues to engulf the Hill.