“If this shallow, hurried and wholly partisan impeachment were to succeed, it would rip the country apart, pouring gasoline on the fire of cultural divisions that already exist,” Alexander said. “It would create the weapon of perpetual impeachment to be used against future presidents whenever the House of Representatives is of a different political party.” He added: “The framers believed that there should never, ever be a partisan impeachment. That is why the Constitution requires a 2/3 vote of the Senate for conviction. Yet not one House Republican voted for these articles.”

On Tuesday, Trump is set to address Congress for the annual State of the Union address, which is increasingly likely to resemble a cathartic victory lap following months of quixotic Democratic calls for the president’s removal from office. Republicans have a 53-47 majority in the chamber, and can afford up to three defections when the Senate considers whether to call additional witnesses Friday — a question that is considered by a simple majority vote. In the event of a 50-50 tie, by rule, the vote on witnesses would fail in the Senate. Chief Justice of the United States John Roberts is likely to abstain rather than assert his debatable power to cast a tie-breaking vote.

Should the witness vote fail as expected, the Senate would likely then vote on the articles of impeachment Friday night or sometime Saturday. An extraordinarily unlikely two-thirds supermajority vote is needed to convict and remove Trump; otherwise he will be acquitted.

As of midnight Friday, Sen. Susan Collins, R-Maine, has announced she wants to hear from a “limited” number of additional witnesses; Sen. Mitt Romney, R-Utah, has strongly signaled he wants to hear from Bolton; and Sen. Lisa Murkowski, R-Alaska, told Fox News late Thursday she was still weighing the issue and would decide in the morning. (“I’m gonna go back to my office and put some eyedrops in so I can keep reading. That’s gonna be my job,” Murkowski told Fox News, adding that she anticipated a “long night.”)

But Alexander, in his dramatic late-night statement that came at the close of the Senate’s session Thursday, torpedoed Democrats’ hopes that he would be the fourth Republican defector they need. Alexander flat-out dismissed Democrats’ “obstruction of Congress” article of impeachment as “frivolous,” citing the longstanding principle of executive privilege. “There is no need to consider further the frivolous second article of impeachment that would remove the president for asserting his constitutional prerogative to protect confidential conversations with his close advisers,” Alexander said.

At the same time, he said Democrats had easily proven their case on the “abuse of power” count that “the president asked Ukraine to investigate Joe Biden and his son, Hunter” and that “the president withheld United States aid, at least in part, to pressure Ukraine to investigate the Bidens.” However, Alexander, who is retiring, asserted that Trump’s conduct did not justify the extraordinary remedy of his immediate removal by the Senate, especially in an election year.

“I worked with other senators to make sure that we have the right to ask for more documents and witnesses, but there is no need for more evidence to prove something that has already been proven and that does not meet the United States Constitution’s high bar for an impeachable offense,” Alexander said.

“There is no need for more evidence to prove that the president asked Ukraine to investigate Joe Biden and his son, Hunter; he said this on television on October 3, 2019, and during his July 25, 2019, telephone call with the president of Ukraine,” he continued. “There is no need for more evidence to conclude that the president withheld United States aid, at least in part, to pressure Ukraine to investigate the Bidens; the House managers have proved this with what they call a ‘mountain of overwhelming evidence.’ There is no need to consider further the frivolous second article of impeachment that would remove the president for asserting his constitutional prerogative to protect confidential conversations with his close advisers.

“It was inappropriate for the president to ask a foreign leader to investigate his political opponent and to withhold United States aid to encourage that investigation,” he continued. “When elected officials inappropriately interfere with such investigations, it undermines the principle of equal justice under the law. But the Constitution does not give the Senate the power to remove the president from office and ban him from this year’s ballot simply for actions that are inappropriate.”

Sen. Lamar Alexander, R-Tenn., announced he would not support additional witnesses in Trump’s impeachment trial — in a major win for President Trump that likely ensures his imminent acquittal. (Associated Press) Indeed, Alexander said, “Our founding documents provide for duly elected presidents who serve with ‘the consent of the governed,’ not at the pleasure of the United States Congress. Let the people decide.”

“The question then is not whether the president did it, but whether the United States Senate or the American people should decide what to do about what he did,” Alexander said. “I believe that the Constitution provides that the people should make that decision in the presidential election that begins in Iowa on Monday. The Senate has spent nine long days considering this ‘mountain’ of evidence, the arguments of the House managers and the president’s lawyers, their answers to senators’ questions and the House record. Even if the House charges were true, they do not meet the Constitution’s ‘treason, bribery, or other high crimes and misdemeanors’ standard for an impeachable offense.”

Reaction from the left was immediate and emotional. Mara Gay, a member of The New York Times editorial board, lamented on MSNBC that the situation was “really a capstone in a, just, total collapse of faith in American institutions.”

Gay went on to say that her father grew up in the Jim Crow-era South, and declared that Republicans’ arguments were “quite familiar” and reminded her of that time.

“And you know, I have to say, as somebody who grew up with a father who grew up in the Jim Crow South, and in, uh, Jim Crow Detroit, a lot of what this has looked like from the Republican side, the kind of a maddening and farcical nature of this, the lack of good-faith argument, sounds very familiar to me. It’s actually very scary.”

Anchor Brian Williams, who notably lied repeatedly in order to embellish his time in Iraq, then said that Gay spoke for a “metric ton” of the network’s viewers.

Video: New York Times editorial board member Mara Gay says tonight is “very scary” and attacks Republicans voting against witnesses as akin to supporter of “Jim Crow” laws. She adds that tonight is “a capstone in a just total collapse of faith in American institutions” 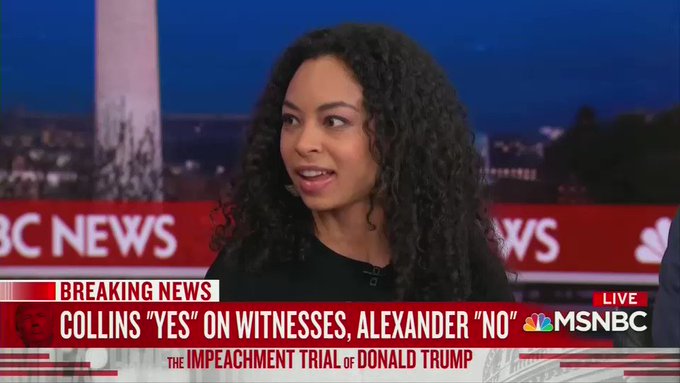 The Senate impeachment trial question-and-answer phase wrapped up Thursday night after a total of 180 interrogatories, setting up the pivotal vote Friday on whether to subpoena additional witnesses and documents, or to hold a final vote on whether to impeach or acquit President Trump.

Pompeo tells lawmakers the ‘tide is turning’ against China
July 30, 2020