A judge in Harris County, Texas, on Wednesday ordered residents to start wearing face masks in public for 30 days beginning next week — or possibly face a fine.

But Judge Lina Hidalgo’s action, which intended to help stem the spread of the coronavirus in the third most populous county in the U.S., drew immediate pushback — including from the state’s lieutenant governor, who called the move “the ultimate government overreach,” and Rep. Dan Crenshaw, who wrote that “commonsense guidelines” should never lead to “unjust tyranny.”

Lt. Gov. Dan Patrick noted in a Twitter message that Hidalgo’s order – affecting some 4 million Texans in Houston and some nearby communities – was announced on the same day as plans surfaced for closing a costly temporary hospital “because it wasn’t needed.”

“These kind of confused government policies fuel public anger — and rightfully so,” wrote Patrick, who has been a vocal advocate for reopening the Texas economy and getting people back to work. 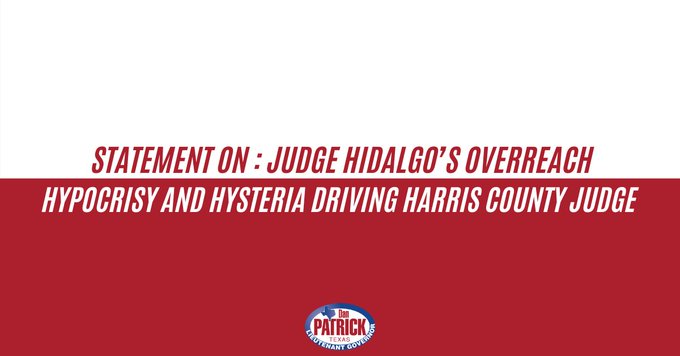 Crenshaw said health guidelines should be “emphatically promoted,” but he objected to the punitive aspects of the judge’s order.

Should guidelines for masks in confined spaces be emphatically promoted? Absolutely.

Do not let commonsense guidelines lead to unjust tyranny.https://www.houstonchronicle.com/news/houston-texas/houston/article/harris-county-mandatory-mask-order-coronavirus-15217911.php …

Harris County Judge Lina Hidalgo on Wednesday will order residents to cover their faces in public, three county officials with knowledge of the plan said, the latest effort by local government to…

The order by Hidalgo — whose role as a county judge in Texas is similar to that of “county executive” in other states — is scheduled to take effect Monday. It requires that people in public areas or in close proximity to other people cover their nose and mouth with a mask or other covering – or face a $1,000 fine, FOX 26 of Houston reported.

Aside from Patrick and Crenshaw, Hidalgo’s order also drew backlash from a Houston police officers’ union, which called the order “draconian,” and said it was seeking guidance from the state attorney general’s office on whether the fine for offenders was legal, the Houston Chronicle reported.

Everyone should be wearing a mask in public, I wear 1 everyday. But making not wearing 1 punishable by law, and asking our officers to enforce it, will do irreparable damage to our relationship with the community. We are already stretched too thin without having to enforce this. 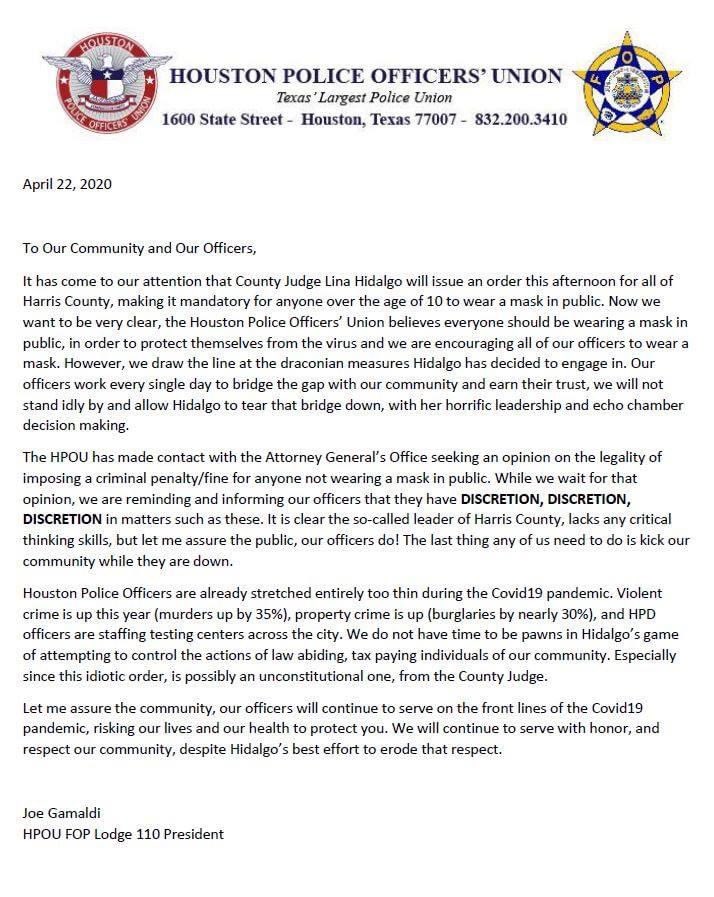 “It is clear the so-called leader of Harris County lacks any critical thinking skills,” President Joe Gamaldi of Houston Police Officers’ Union Lodge 110 wrote in a statement. “But let me assure the public, our officers do!”

Hildalgo responded by saying the police were “entitled to their opinions.” She added that she wasn’t looking to impose “a police state,” but rather was looking to slow the spread of the virus.

Everyone has the materials they need at home to make a mask – an old t-shirt, a bandana or a scarf. The idea is simply to cover your nose and mouth. Visit http://readyharris.org  to see instructions on how to make a mask, or simply wear your favorite scarf or bandana. 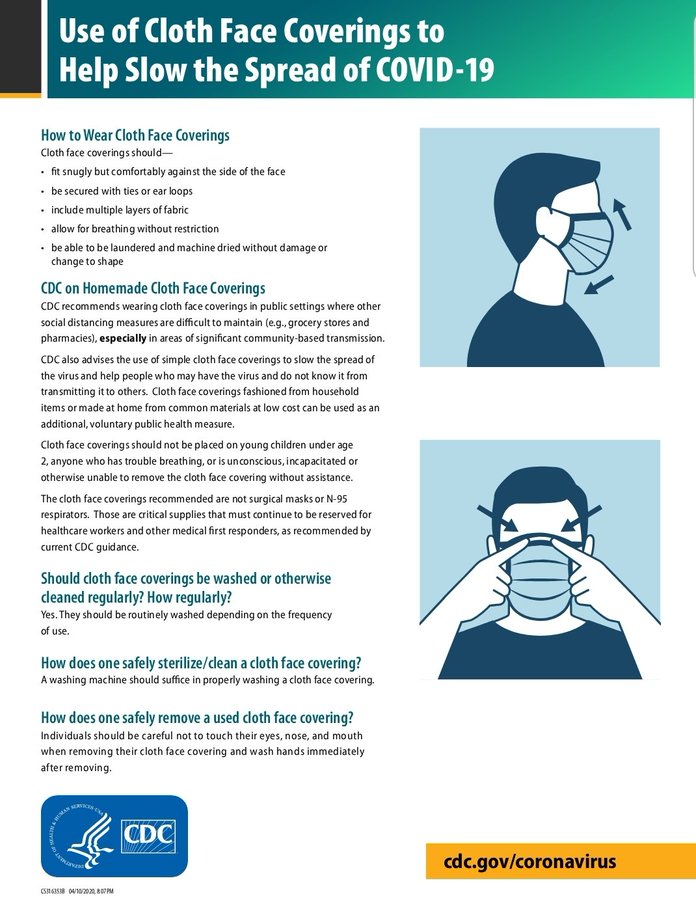 “It’s something we have to do for the sake of our safety, our lives and our economy,” the judge said, according to the Chronicle.

The city of Houston reported 27 new infections Wednesday, and for the third straight day reported no deaths related to the virus, the newspaper reported.