‘They Hate America’: The Surprising Moments Democrats Refused to Clap For During Trump’s SOTU

The State of the Union is always a good measure on what Democrats seem to truly care about—and on Tuesday it was clear their disdain for President Trump took priority over any accomplishment he’s made to improve the lives of the average Americans. Below are just some of the surprising times Democrats refused to clap during Tuesday night’s speech.

“The unemployment rate for women reached the lowest level in almost 70 years. And, last year, women filled 72 percent of all new jobs added.

“Workers without a high school diploma have achieved the lowest unemployment rate recorded in U.S. history. A record number of young Americans are now employed.”

More Americans employed than ever before

Democrats sit for all of it, they hate America & minorities 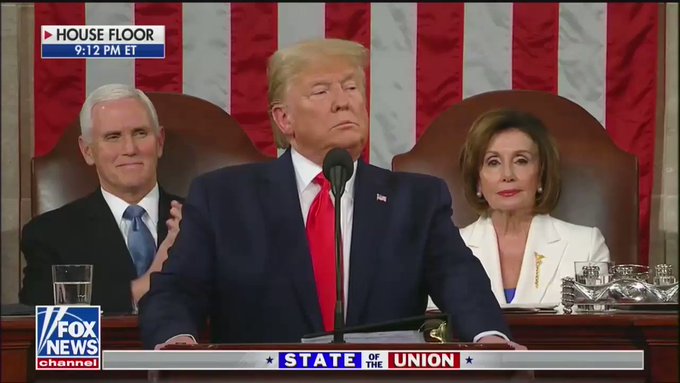 Wow. The liberal women are not happy to hear more women are working and unemployment has hit an all-time low? 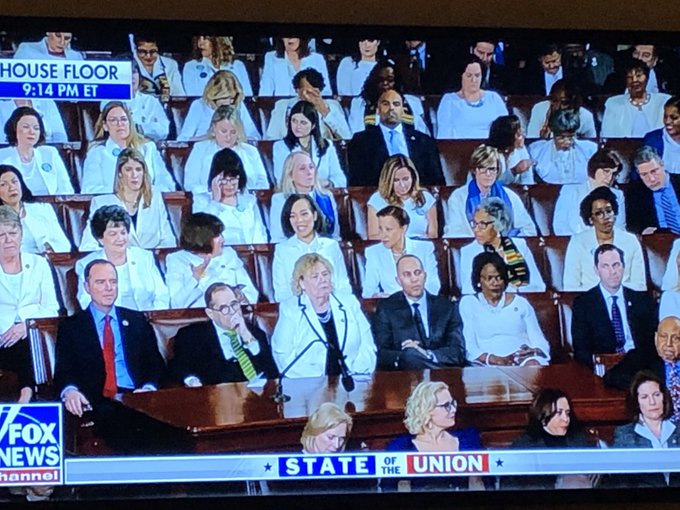 “Six days ago, I replaced NAFTA and signed the brand-new U.S.-Mexico-Canada Agreement into law. The U.S.M.C.A. will create nearly 100,000 new high-paying American auto jobs, and massively boost exports for our farmers, ranchers, and factory workers. It will also bring trade with Mexico and Canada to a much higher level, but also to be a much greater degree of fairness and reciprocity. We will have that: fairness and reciprocity. And I say that, finally, because it’s been many, many years that we were treated fairly on trade,” he said.

“This is the first major trade deal in many years to earn the strong backing of America’s labor unions.”

Nancy Pelosi won’t even clap for USMCA, which she claimed to champion.

Military investments and the Space Force.

“To safeguard American liberty, we have invested a record-breaking $2.2 trillion in the United States military. We have purchased the finest planes, missiles, rockets, ships and every other form of military equipment, and it’s all made right here in the USA,” Trump said.

“And just weeks ago, for the first time since President Truman established the Air Force more than 70 years earlier, we created a brand-new branch of the United States Armed Forces. It’s called the Space Force.”

The Democrats didn’t applaud the line about increased military investment.

Update: Some Dems were happy about the Space Force.

“Charles is one of the last surviving Tuskegee Airmen — the first black fighter pilots — and he also happens to be Iain’s great-grandfather. Incredible story,” Trump said.

“After more than 130 combat missions in World War II, he came back home to a country still struggling for civil rights and went on to serve America in Korea and Vietnam. On Dec. 7th, Charles celebrated his 100th birthday. A few weeks ago, I signed a bill promoting Charles McGee to Brigadier General. And earlier today, I pinned the stars on his shoulders in the Oval Office. General McGee, our nation salutes you. Thank you, sir.”

This appears to show far-left Democrat Reps. Rashida Tlaib (MI) and Ilhan Omar (MN) *refusing* to stand for the last surviving Tuskegee Airmen Brig. Gen. Charles McGee
Looks like nearly everyone else stood, except for those two, who didn’t want to honor a US hero. (At very end) 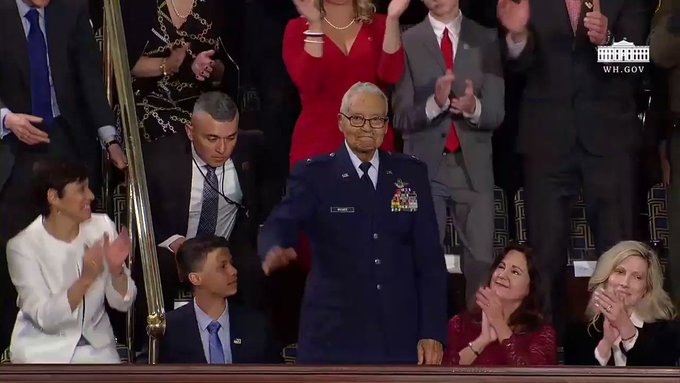 On school choice. While it’s not surprising they did not stand for the overall topic, it did raise eyebrows that they seemed to shun fourth grader Janiyah Davis being honored for receiving an opportunity scholarship.

“Janiyah’s mom, Stephanie, is a single parent. She would do anything to give her daughter a better future. But last year, that future was put further out of reach when Pennsylvania’s governor vetoed legislation to expand school choice to 50,000 children,” Trump said.

“But, Janiyah, I have some good news for you, because I am pleased to inform you that your long wait is over. I can proudly announce tonight that an Opportunity Scholarship has become available, it’s going to you, and you will soon be heading to the school of your choice.”

Pretty incredible watching a bunch of politicians ANGRY that a young girl is getting the chance to go to the school of her choice.

Meanwhile, same politicians went to private school and sent their kids there. Hypocrites.#SOTU

Numerous Democrats appeared to not celebrate a fourth-grade black girl who received a scholarship on Tuesday night from President Donald Trump during the State of the Union Address. “The next step…

Jody Jones, whose brother Rocky was killed in California by an illegal immigrant after the state released him under its sanctuary policies.

“Rocky was at a gas station when this vile criminal fired eight bullets at him from close range, murdering him in cold blood. Rocky left behind a devoted family, including his brothers, who loved him more than anything else in the world. One of his grieving brothers is here with us tonight,” Trump said. “Jody, would you please stand? Jody, thank you. Jody, our hearts weep for your loss, and we will not rest until you have justice.”

Nancy Pelosi not even acknowledging Rocky Jones’s Brother, Rocky was murdered by an illegal Alien in her state of California.
How VILE is that? Disgusting!#StateOfTheUnion #Trump #Democrats

Protecting patients with preexisting conditions, as well as Medicare and Social Security.

Democrats sit for preexisting conditions. Think about that. #SOTU

After speaking about Ellie Schneider, who was born at just 21 weeks and 6 days, Trump said, “every child deserves the best chance, which is why I’m asking Congress to fund $50M for neonatal research.”