Trump Will Sign USMCA Today, and the Dems Aren’t Invited

President Trump will sign the United States-Mexico-Canada Agreement at the White House on Wednesday. The measure, which will update NAFTA, was passed on a bipartisan basis, 358 to 41 in the House and 89 to 10 in the Senate. But according to some media outlets, Democrats won’t be in attendance.

.@byrdinator reports: House @SpeakerPelosi has not been invited to @realDonaldTrump’s planned Wednesday signing of the USMCA trade agreement, per a Pelosi spox. Democrats largely voted for USMCA, alongside Republicans, when it came to the House floor in December.

Sure. But those same Democrats also voted to boot the guy out of office. Why would he want them there celebrating with him? The contrast couldn’t be more obvious than the day Pelosi announced the Democrats were moving forward with the articles of impeachment, and an hour later acting as if everything was hunky dory with the White House by announcing the successful USMCA deal.

It’s a win for the administration. In fact, it’s followed by Tuesday’s major accomplishment, a new Middle East peace plan with Israel.

GOP
While Democrats continue to pursue this baseless impeachment sham, President @realDonaldTrump is delivering for the American people!

This week’s achievements include: introducing a Middle East Peace Plan, hosting 2 rallies, and signing the USMCA! 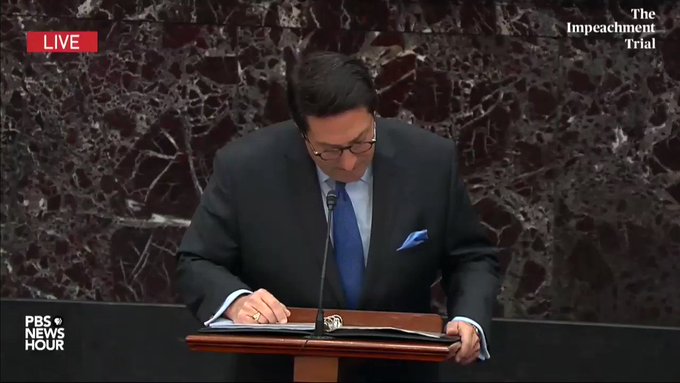 The opening arguments in Trump’s Senate impeachment trial wrapped up on Tuesday. But no one seems to know when it will all be over, as a handful of moderate Republicans appear to be on the verge of voting for additional witnesses.