As Senate Republicans were reeling late Monday following two unsuccessful procedural votes on their version of a coronavirus response bill, House Speaker Nancy Pelosi, D-Calif., released her chamber’s version of legislation to fight the disease and its economic effects — and it includes a raft of provisions with questionable relevance to the pandemic that has killed more than 17,000 worldwide and sickened more than 390,000.

The $2.5 trillion package includes many of the same elements as the Senate bill, which is still being negotiated as of Tuesday morning — Senate Minority Leader Chuck Schumer says he expects to vote on a Senate bill by Tuesday night. These similarities include support for workers and small businesses financially impacted by the large-scale economic slowdown from stemming the spread of the outbreak; help for hospitals and health care workers in need of personal protective equipment (PPE) and other supplies; tax breaks for average Americans; direct cash assistance to all adult Americans and other measures directly applicable to the crisis at hand. But it also includes a number of other measures that have rankled Republicans, including funding for the Kennedy Center — a performing arts center in Washington, D.C. — the elimination of the U.S. Postal Service’s debt to the treasury, a requirement that airlines accepting assistance under the bill have a union representative on their board, environmental regulations for airlines and more.

People are dying from coronavirus but @SpeakerPelosi is blocking the relief package Americans need to fund a return of the “Obamaphone” and a host of other progressive handouts.

“Obamaphones” are back! – NRCC

Americans are literally dying from the coronavirus as we speak, but that’s not stopping Nancy Pelosi and House Democrats from blocking the life-saving coronavirus stimulus package to cram it full of…

Pelosi argued that the Senate bill, unlike the House’s, would “put corporations first, not workers and families.” Republicans, on the other hand, argued that Democrats are using the pandemic to push through the left’s agenda items under the pretense of a bill to fight the coronavirus.

“They ought to be embarrassed,” Senate Majority Leader Mitch McConnell said of similar proposals being pushed by Senate Democrats. “There is no time for this nonsense.”

The House Democrats’ bill requires that any company getting coronavirus-related aid disclose its diversity stats, including its employees’ race, gender, pay, corporate board diversity and the structure of its offices that deal with diversity and inclusion.

The reports, which will be made public within a year of the companies accepting federal coronavirus-related assistance, will also include the “number and dollar value invested with minority-and-women owned suppliers … including professional services (legal and consulting) and asset managers, and deposits and other accounts with minority depository institutions, as compared to all vendor investments.”

Seriously? Now is the time to help struggling Americans, not play swamp politics with virus aid. 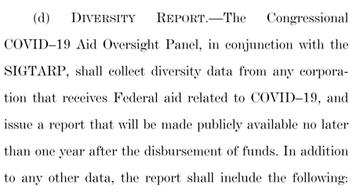 One section of the bill would eliminate $11 billion worth of debt for the U.S. Postal Service — money that it currently owes to the Treasury Department. It would also require the Treasury to “eliminate the $3 billion annual borrowing limit in current law,” according to a summary of the bill released by House Democrats.

In addition to requiring each airline that receives money through the bill to have a union representative on its board, the House Democrats’ summary says the bill would nullify a variety of executive orders issued by the Trump administration on collective bargaining.

Any airlines that accept assistance from the House Democrats’ bill would be forced to “offset their carbon emissions and reduce their overall emissions by 50 percent by 2050.” That matches with environmental plans from Democratic presidential candidates Joe Biden and Bernie Sanders to have the U.S. reach net-zero carbon emissions by 2050.

The House bill would also expand an FAA program that incentivizes airports to purchase environmentally friendly equipment and create a “cash for clunkers” program — similar to one created by the Obama administration for cars — but for older airplanes.

The Pelosi bill includes a wish list that has nothing to do with #COVIDー19.

Dems couldn’t this pass this bill in normal times!https://www.wsj.com/articles/the-pelosi-schumer-contagion-11585006077 …

Democratic leaders kill a rescue bill under pressure from the left

Additionally, it will provide $1.2 billion in grants over five years for the production of “sustainable aviation fuels” that reduce greenhouse gas emissions by “at least 30 percent” compared to traditional jet fuel.

One section of Pelosi’s bill allocates $1 billion and calls for federal authorities to immediately expand the “emergency lifeline broadband benefit” for every household that contains at least one “qualifying low-income consumer.” That would include any “mass-market retail service by wire or radio that provides the capability to transmit data to and receive data from all or substantially all Internet endpoints, including any capabilities that are incidental to and enable the operation of the communications service.”

That benefit would include cell phones.

The National Republican Congressional Committee said the House bill is “full of unrelated liberal goodies, including the return of the Obamaphone,” a program that the Government Accountability Office found was “rife with fraud” according to a Washington Times report at the time.

House Democrats’ plan, according to its summary, expands a recent law that provides “pension funding relief for a number of community newspaper plan sponsors.”

Two different sections in the House Democrats’ summary of the bill address minimum wage. One provision would “require corporations that receive any federal assistance” to pay all of its workers at least $15 per hour. In addition to the minimum wage, that same provision includes a ban on golden parachutes, restricted bonuses and compensation for executives, a ban on stock buybacks and a ban on companies changing their collective bargaining agreements.

The House Democrats’ bill provides $35 million to ensure that the D.C.-based John F. Kennedy Center for the Performing Arts is able to remain operational and pay its expenses during the coronavirus-related economic slowdown.

Patron Update: As we continue to prioritize the health and well-being of our patrons, artists, staff, volunteers, and community at large, we have canceled all public events scheduled through May 10, 2020, in an effort to reduce the spread of COVID-19. 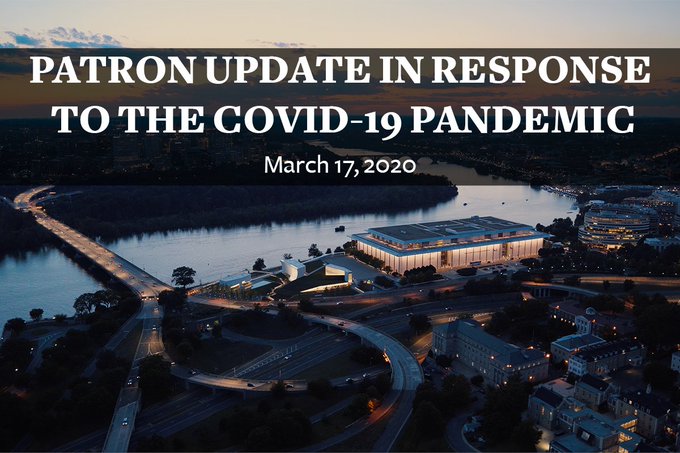 The House Democrats’ bill has a variety of election-related mandates, including that states allow at least 15 days of early voting for elections and no-excuse absentee mail-in voting — two things that could be useful in holding elections during the continuing coronavirus threat.

But is also prohibits states from “imposing additional conditions or requirements on the eligibility of a voter to cast an absentee ballot such as notarization or witness signatures, and prohibits requiring identification to obtain an absentee ballot.”

It also forces states to allow same-day voter registration, a practice that is becoming more common throughout the U.S. but is far from universal.

Democrats’ summary of their bill would eliminate “a minimum of $10,000 of federal and private student loan debt for each indebted borrower.” Student loan forgiveness has been a go-to issue for Democrats in Congress and on the presidential campaign trail.