White House Sends Blistering Response to Nadler: No, We Aren’t Participating in Your Bogus Hearings

The White House on Sunday notified House Judiciary Committee Chairman Jerry Nadler (D-NJ) that they would not be participating in the Committee’s impeachment hearings scheduled for Wednesday.  “As you know, this baseless and highly partisan inquiry violates all past historical precedent, basic due process rights, and fundamental fairness,” White House Counsel Pat Cipollone wrote to Nadler.

In his letter, he blasted Nadler for giving the White House little time to respond to the letter and for scheduling the hearings “during the time that you know the President will be out of the country attending the NATO Leaders Meeting in London.” Cipollone also suggested the hearing is a waste of time because it will focus on the “historical and constitutional basis of impeachment,” and will feature academics, not witnesses relating to Ukraine or the current impeachment inquiry.

Nadler sent another letter with a different deadline, something Cipollone said provides absolutely no details for the White House.  “Again, your letter provided no information whatsoever as to what the schedule will be, what the procedures will be, or what rights, if any, the Committee intends to afford the President,” he wrote. “In other words, you have given no information regarding your plans, set arbitrary deadlines, and then demand a response, all to create the false appearance of providing the President some rudimentary process.”

He did, however, blast Nadler for making it seem as though he was affording Trump and his legal team any sort of due process. According to Cipollone, Nadler isn’t following past precedent, like during the Clinton impeachment saga. When the Clinton impeachment hearings took place, the president’s legal team had two-and-a-half weeks to prepare and allowed the president to have a say in a hearing date. None of those things have been done in this case, Cipollone said.

The White House Counsel slammed the Democrats for the moves they’ve made thus far, specifically House Intelligence Committee Chairman Adam Schiff’s (D-CA) refusal to allow Trump to participate in closed-door hearings.  “There, Chairman Schiff attempted to concoct a false narrative through selective citation of the testimony of witnesses of his choosing, after vetting them during closed-door depositions hidden from both the President and the American public,” he wrote. “The President was not allowed to present evidence, to call witnesses, to cross examine witnesses, or to even see transcripts until weeks after testimony had been taken, and he was allowed absolutely no participation in the public hearings that followed. Further, witness requests made by Republicans were denied. In addition, certain questioning of the witnesses who did testify was censored by Democrats.”

Cipollone pointed out the clear difference between the Nixon and Clinton impeachment proceedings and the Democrats’ current impeachment push. In the past, both parties had subpoena powers. In the Trump impeachment inquiry, only Democrats have that power and any Republican requests have been stifled. He argued that this will cause “long term institutional harm.” 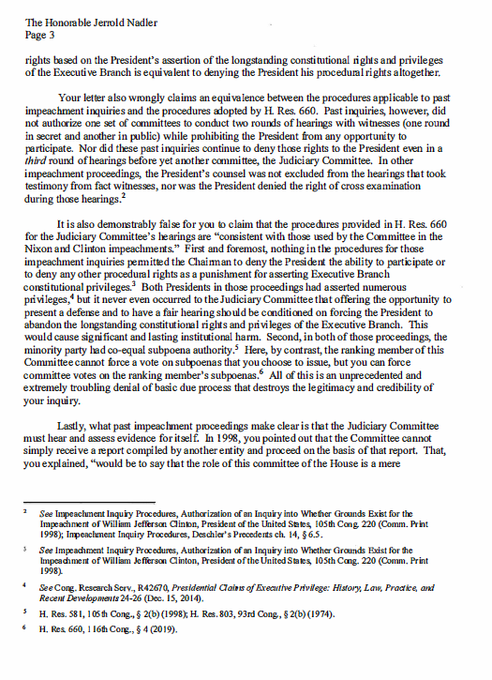 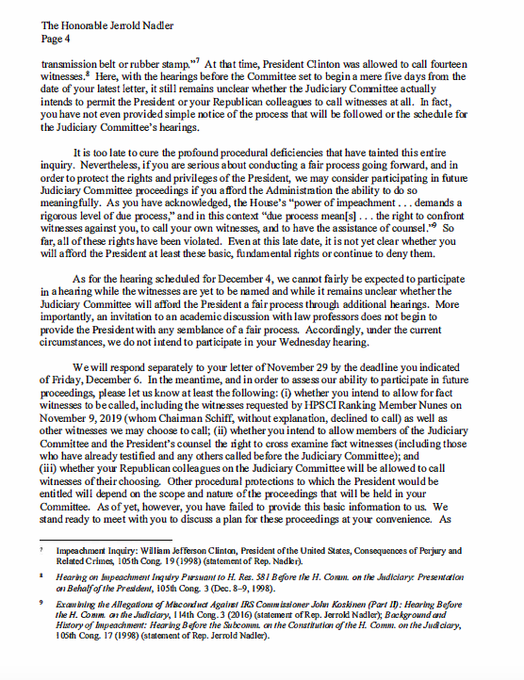 The announcement comes after Nadler sent the White House a letter telling them they have until 5 p.m. EST on December 6th to let the Committee know whether or not Trump’s legal counsel will participate in the hearings. The Committee Chairman sent a similar letter to Ranking Member Doug Collins (R-GA) letting him know he has the same deadline to send a list of witnesses to Committee Democrats to review. Although Republicans can issue subpoenas and interrogatories, Nadler has the final say in whether or not they can and will be issued.