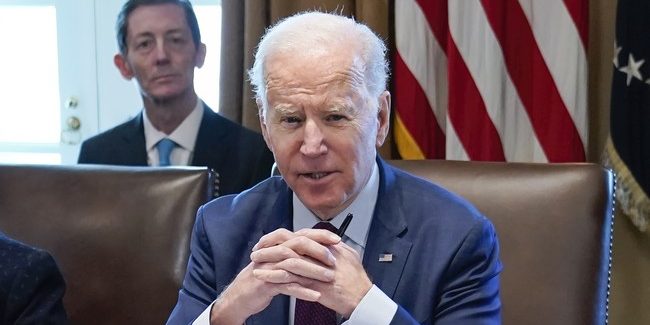 Speaking from the Roosevelt Room at the White House Tuesday morning, President Joe Biden finally announced a ban on Russian oil imports into the United States. For weeks Ukrainian President Volodymyr Zelenskyy and lawmakers on Capitol Hill, Democrats and Republicans, have called for the move.

“Today we are targeting the main artery of Russia’s economy,” Biden said. “This is a step we’re taking to inflict further pain on Putin but there will be costs as well here in the United States. I said I would level with the American people from the beginning and when I first spoke to this I said defending is going to cost. It’s going to cost us as well in the United States.”

Biden also said the U.S. continues to send weapons and humanitarian aid to Ukraine as Russia continues its assault on civilians. The U.S. is working with the UK, France, Poland and other NATO countries on managing the refugee crisis, which grows worse by the day.

“Ukraine will never be a victory for Putin. Putin may able to take a city, but he’ll never be able to hold a country and if don not respond to Putin’s assault on global peace and stability today, the cost of freedom and to the American people, will be even greater tomorrow,” Biden said. “So we’re going to continue to support the brave Ukrainian people as they fight for their country.” Biden attempted to beat back criticism of his war on domestic energy production and falsely claimed gas prices are high because of price gouging by companies. He doubled down on his climate agenda and push for an energy “transition.”

“It’s simply not true that my administration or policies are holding back domestic energy production,” Biden said. “To protect our economy long term we must become energy independent…it should motivate us to accelerate a transition to clean energy.”

Biden didn’t take questions from reporters about the decision.

Meanwhile, Biden is being slammed for filling the energy gap left by the ban with oil from Iran and Venezuela.