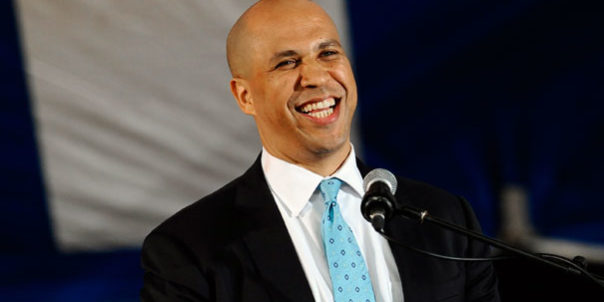 There is no denying Junior Democratic Senator Corey Booker from new Jersey is charismatic and delivered an upbeat  “we will rise” speech on opening night of the  DNC, evoking shades of Barack Obama’s 2004 coronation as the next DNC star.   Elected  to the  U.S.  Senate in 2013, Booker shot to political stardom as the mayor of crime riddled and economically depressed Newark New Jersey from 2006 to 2013 where he voluntarily cut his own salary and shoveled snow out of citizen’s driveways.

He attended Stanford University where he played college football  and  is a Rhodes Scholar and a Yale Law School Graduate. The forty-seven year old has never been married and is ambiguous when asked if he’s gay. He claims he enjoys testing people on their  homophobia. He is a liberal  media darling on this rise.

Unlike, most progressive U.S. Senators, Booker’s Monday night speech at the DNC in Philadelphia cited the founding fathers without contempt and touched on American Greatness. It seems the anti-American History rhetoric of the past eight years of Michelle Obama, in particular, echoed by Bernie Sander’s Protestor’s who have roamed the streets of Cleveland & Philadelphia this month chanting: “America was never great” is just not attracting  independent voters.  Booker & Michelle Obama’s speeches were strategically delivered to tone that stuff down because it doesn’t play well in key swing states in the midwest and south.

Booker is a self proclaimed fiscal conservative and actually declined a position in the Obama Administration because he didn’t want to leave his job undone in Newark. Make no mistake, Booker aligns left on all litmus test social issues ( abortion, gay marriage etc.) but unlike Obama’s scant executive experience when he took office, Booker actually ran a city for seven years. That city being Newark New Jersey  makes Booker a compelling Hillary apologists as he jabs at Donald Trump’s  past business practices in The Garden State on the campaign trail.