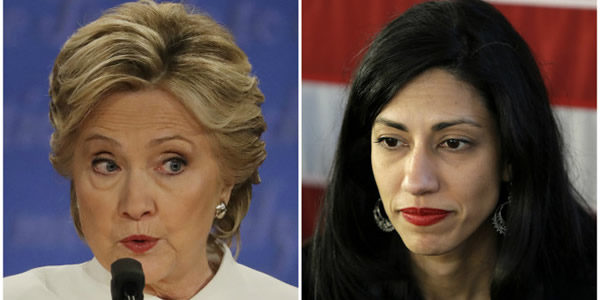 Well, we now know why the Clinton camp reacted so strongly to FBI Director James Comey’s announcement that the bureau will be reviewing some 650,000 emails discovered on the laptop of Anthony Weiner. Weiner is the estranged husband of top Clinton aide Huma Abedin. Both Abedin and Weiner shared this device, with the former sending State Department emails from it. Weiner is under investigation for aberrant online communications with an underage girl, which is how these emails were discovered (via CBS News):

The FBI has found emails related to Hillary Clinton’s tenure as secretary of state on the laptop belonging to the estranged husband of Huma Abedin, Anthony Weiner, according to a U.S. official.These emails, CBS News’ Andres Triay reports, are not duplicates of emails found on Secretary Clinton’s private server. At this point, however, it remains to be seen whether these emails are significant to the FBI’s investigation into Clinton. It is also not known how many relevant emails there are.

Abedin has sworn on multiple occasions that she turned over all State Department-related documents and the devices she used to send those emails. In June, she swore that she turned over all devices to her lawyers that she thought might have State Department material on them. In February of 2013, she signed a routine form swearing that all documents, from classified to administrative, relating to the State Department were turned over. Penalties of perjury were applied to both cases. Granted, intent has to be proven, but one would think that some inquiry into this angle of the investigation would also begin, yes? New emails relating to Clinton’s tenure as our top diplomat, which is tied to her unauthorized and unsecure email server, have been found. That’s sort of torpedoes the big liberal hope that all of these were duplicates. I’m sure more emails of a similar nature will be found, given the sheer volume of what needs to be reviewed. Abedin even said that she didn’t delete old emails from her inbox.

Yes, the details about these emails, other than they’re new, is scarce. But the fact that Clinton has been caught in lie after lie about the nature, circumstances, and contents of her private email server only further fortify the already solid assumption that she’s dishonest and untrustworthy. The problem is that Donald Trump isn’t much better on these character issues either, but there is one huge difference between the two candidates. One is under federal investigation, while the other is not.