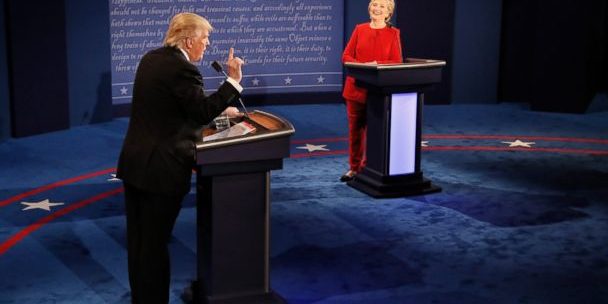 Donald Trump would not commit Wednesday night to accepting the results of the presidential election if he loses on Nov. 8, in a striking moment during his final debate with Hillary Clinton that underscored the deepening tensions in the race – as the bitter rivals defined the choice for voters on an array of issues not three weeks from Election Day.

The debate in Las Vegas, moderated by Fox News’ Chris Wallace, started with a measured discussion on policy disputes ranging from gun rights to abortion to immigration. But it ended with the candidates hurling a grab-bag of accusations and insults at each other.

Trump called Clinton a “nasty woman.” Clinton called Trump the “most dangerous” person to run for president in modern history.

The most pointed moment came when Trump – who for weeks has warned of a “rigged” election – was asked whether he will commit to accept the results of the election.

“I will look at it at the time,” Trump said, citing his concerns about voter registration fraud, a “corrupt media” and an opponent he claimed “shouldn’t be allowed to run” because she committed a “very serious crime” with her emails.

Pressed again whether he’s prepared to concede if he loses, Trump again said: “I will tell you at the time. I’ll keep you in suspense.”

“That is not the way our democracy works,” she said. “He is denigrating, he’s talking down our democracy and I for one am appalled.”

Trump responded by calling the Justice Department’s handling of her email probe “disgraceful.”

The exchange was among many contentious moments at Wednesday’s debate, which covered several issues including the national debt that have gotten little attention in the race so far – but flared with arguments between the candidates over WikiLeaks, over Russia, over the Clinton Foundation and over women’s allegations of groping against Trump.

Through the thicket of accusations and personal animus – they never shook hands on stage – the candidates tried generally to mount a closing debate-stage argument about experience.

“For 30 years, you’ve been in a position to help. … The problem is you talk, but you don’t get anything done, Hillary,” Trump said. “If you become president, this country is going to be in some mess, believe me.”

Clinton countered by contrasting some of her experiences against Trump’s. She said when she was monitoring the Usama bin Laden raid in the Situation Room, “He was hosting ‘The Celebrity Apprentice.’”

“I’m happy to compare my 30 years of experience … with your 30 years, and I will let the American people make that decision,” Clinton said.

Trump, meanwhile, again disputed the multiple allegations of groping that women have leveled against him since the candidates’ last encounter. He also said he thinks the Clinton campaign is behind the claims, charging, “They either want fame or her campaign did it.”

Clinton said, “Donald thinks belittling women makes him bigger.” Trump repeated that “nobody has more respect for women” than him.

Trump then shifted to blast the Clinton Foundation as a “criminal enterprise.” He pointed to donations from countries like Saudi Arabia to question Clinton’s commitment to women’s rights. He asked her if she would return money from countries that treat certain “groups of people horribly,” which she did not answer directly.

The candidates’ third and final debate now sets a bitter tone for the homestretch of the 2016 presidential campaign – a race that already stands out as arguably the most personal, caustic and unpredictable White House battle in modern politics.

Trump, slipping in the polls amid various campaign controversies, said at the last debate that Clinton should be in jail. Clinton has blasted Trump all along as temperamentally unfit for office.

Since the second debate, numerous women have come forward to accuse Trump of groping them, allegations he denies. WikiLeaks also has embarrassed the Clinton campaign by releasing thousands of hacked emails purportedly from her campaign chairman’s account. FBI files alleging a State Department official sought a “quid pro quo” to alter the classification on a Clinton server email added to the campaign’s – and Obama administration’s – woes.

The WikiLeaks controversy came up Wednesday night when Clinton asked if Trump would “condemn” Russian espionage. He denied knowing Vladimir Putin but said the issue is the Russian president has “no respect” for her.

“That’s because he’d rather have a puppet,” Clinton shot back.

Trump later said he condemns any interference by Russia in the election.

The candidates also sparred over gun rights, with the Republican nominee charging that the Second Amendment is “under absolute siege” and would be eroded if his opponent wins.

“We will have a Second Amendment which will be a very, very small replica of what we have now” if Clinton wins, Trump said.

The Democratic nominee countered, “I support the Second Amendment.”

In a graphic exchange, Trump said Clinton’s position on abortion is nearing a point where one could “rip the baby out of the womb in the ninth month.” Clinton accused him of “scare rhetoric.”

They also clashed on immigration, with Trump saying they need to deport “drug lords” and deal with “bad hombres” in the country. Clinton said violent offenders should be deported but then mocked Trump for not pushing his controversial border wall proposal during his high-profile meeting with the Mexican president. “He choked,” she said.

Trump said Clinton “wanted a wall” when she voted for an immigration overhaul a decade ago – and now wants “open borders,” which she denied.

To date, the mounting controversies facing both campaigns have appeared to hurt Trump more than Clinton, who gradually has expanded her lead over the GOP nominee in recent polls.

A Fox News national poll released on the eve of the Las Vegas debate showed Clinton with a 6-point, 45-39 percent lead over Trump in a match-up that includes Libertarian Party nominee Gary Johnson and Green Party candidate Jill Stein.

Trump, in the final three weeks, is thought to be zeroing in on several key battlegrounds including Florida, Ohio and North Carolina – but the polls suggest his path to the presidency remains narrow, as even once-reliably red states like Texas are being contested by the Clinton campaign.