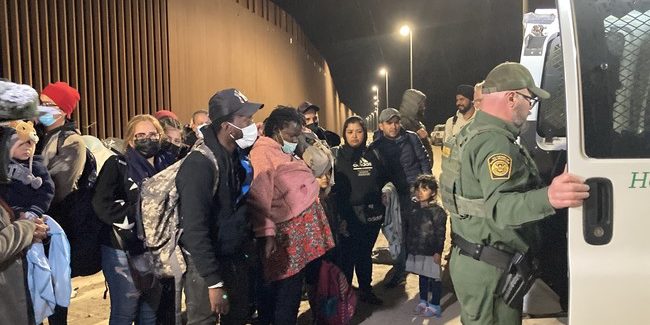 Staying true to his word, Texas Governor Greg Abbott is following through on his plan to send illegal immigrants apprehended in his state to the nation’s capital where an influx of unlawful border crossers can’t be as easily ignored by the Biden administration and Democrats in Congress.

Sure enough, just after 8:00am on Wednesday, the first bus from Texas arrived in Washington between the U.S. Capitol and Union Station transit hub. As cameras for Fox News captured, the door swung open and 23 illegal immigrants began exiting, some with backpacks and all carrying manila envelopes. After they appeared to have wristbands scanned and then cut off their arms, the individuals were free to walk off into the D.C. morning.

According to Lucas Tomlinson, the bus originated in Del Rio, Texas, where Julio has reported on the influx of illegal immigrants since Biden took office in 2021. The buses and drivers were contracted by Texas officials, according to Tomlinson’s on-air reporting, and they drove straight through from Texas to Washington, a 1700+ mile journey that takes more than 25 hours to complete. As Katie reported last week, the Biden administration did not take Gov. Abbott seriously when he announced his plan to send some of the illegal immigrants flooding his state to D.C. and now it seems Abbott has called the White House’s bluff.

“I’m not aware of what authority the governor would be doing that under I think it’s pretty clear this is a publicity stunt,” Psaki said. “I know that the governor of Texas or any state does not have the legal authority to get on a bus,” she added scoffingly.

As Katie pointed out, Abbott’s now in-progress plan to send illegal immigrants to D.C. is little different from the Biden administration’s flights of illegal immigrants around the country under the cover of nightfall. And while “Biden officials are perfectly fine with sending them to your neighborhood, but loudly object when sent to theirs.”

More buses and some flights to D.C. are also planned by Abbott in the days ahead as officials in Texas and other border states brace for an even larger surge of illegal immigrants when the Biden administration allows Title 42 to expire next month.