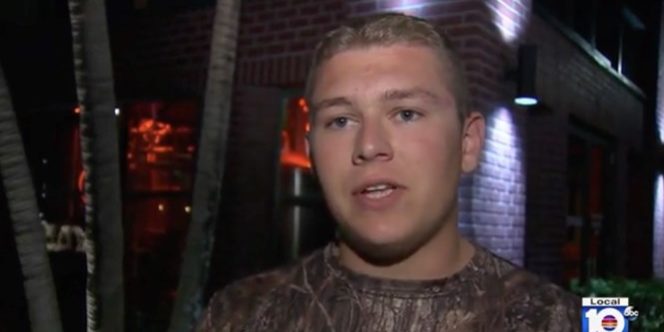 A survivor of the Florida shooting wanted to ask a question relating to hiring military veterans as armed guards during CNN’s town hall event last night. Colton Haab wrote what he wanted to say to the group of politicians and law enforcement officials, who included Sen. Marco Rubio (R-FL) and NRA spokesperson Dana Loesch, but said CNN, wanted him to ask a scripted question instead.

Haab added initially the network allowed him to write his own introductory remarks along with his question, but said, “it ended up being all scripted.” WPLG 10 News, a local ABC affiliate in the Miami-area, reported on this last night (via RCP):

“I expected to be able to ask my questions and give my opinion on my questions,” Haab said.

“Colton Haab, a member of the Junior ROTC who shielded classmates in the midst of terror says he did not get to share his experience,” WPLG’s Janine Stanwood explained.

“Colton wrote questions about school safety, suggested using veterans as armed school security guards but claims CNN wanted him to ask a scripted question instead so he decided not to go,” Stanwood reported.

“CNN had originally asked me to write a speech and questions and it ended up being all scripted,” Haab said. “I don’t think that it’s going get anything accomplished. It’s not gonna ask the true questions that all the parents and teachers and students have.”

Colton declined to ask the question at the event. The town hall was intense, with a lot of heat being brought down on Rubio and Loesch for their pro-Second Amendment positions. Rubio did say he was reconsidering his position on magazine sizes, and open to banning bump stocks and raising the age of purchasing long guns to 21.  Parkland, Florida is still recovering after Nikolas Cruz, a former student, shot and killed 17 people at Marjory Stoneman Douglas High School last Wednesday.

UPDATE: CNN denies anything was scripted.