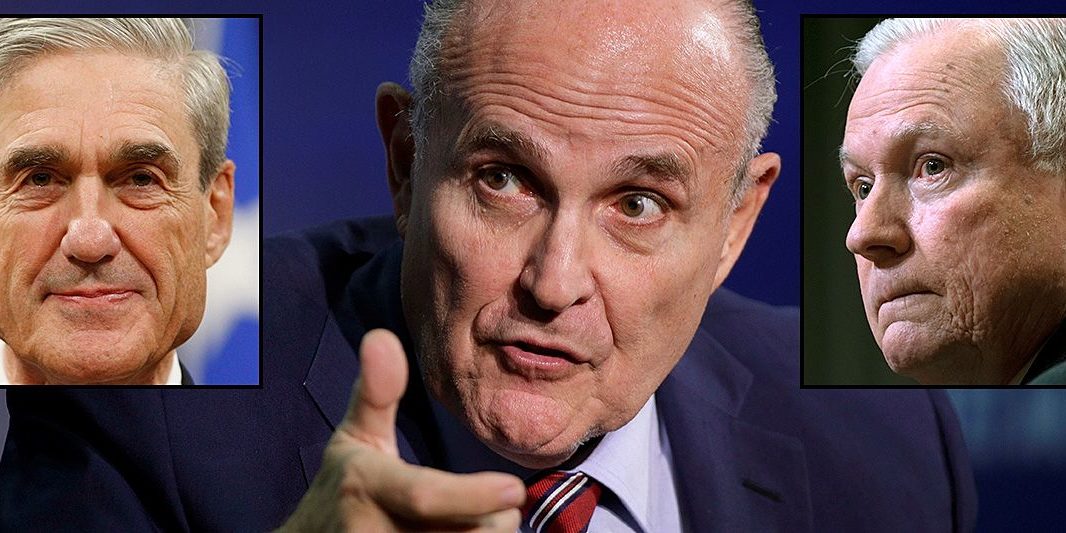 President Trump’s new attorney Rudy Giuliani said Thursday that Attorney General Jeff Sessions should “close” Special Counsel Robert Mueller’s probe – a call that comes amid GOP pressure on Capitol Hill to find out whether the investigation has gone beyond its original mandate.

Giuliani, the former New York City mayor, criticized Sessions and Deputy Attorney General Rod Rosenstein in several interviews this week.  “The basis of the case is dead,” Giuliani said on “Fox & Friends” Thursday, claiming the push to uncover collusion with the Russians has turned up no evidence. “Sessions should step in and close it.” Such a move would seem unlikely. Sessions recused himself from overseeing the Russia investigation due to campaign involvement. Rosenstein stepped in, and appointed Mueller to lead his own probe. But Giuliani stressed, in a separate interview with Fox News’ “Hannity” on Wednesday, that Sessions and Rosenstein should end Mueller’s investigation “in the interest of justice.”

“There’s been too much government misconduct,” Giuliani said on “Hannity.” “The crimes now have all been committed by the government and their agents.” Giuliani’s comments come amid pressure from Republicans on Capitol Hill urging the Justice Department to release the full “scope memo,” which outlines the original scope of the investigation when Mueller was named.  The Justice Department this week shared a redacted version of the memo with Reps. Jim Jordan, R-Ohio, and Mark Meadows, R-N.C., while explaining that the full, unredacted version could not be shared because it pertains to an ongoing criminal investigation. Still, members are pushing to find out whether his team is probing matters outside that original scope laid out by Rosenstein.

“On May 17, 2017, I issued an order entitled ‘Appointment of Special Counsel to Investigate Russian Interference with the 2016 Presidential Election and Related Matters,’ appointing you to serve as Special Counsel for the United States Department of Justice,” Rosenstein wrote to Mueller in the scope memo.

The order states that Mueller is authorized to conduct an investigation “confirmed by then-FBI Director James B. Comey in testimony” before the House Intelligence Committee on March 20, 2017, including “any links and/or coordination between the Russian government and individuals associated with the campaign of President Donald Trump” and “any matters that arose or may arise directly from that investigation.” Rosenstein then includes a more extensive list with a “more specific description” of Mueller’s “authority,” but that portion has been heavily redacted. The unredacted details only outline allegations against former Trump campaign chairman Paul Manafort, for allegedly committing “a crime or crimes by colluding with Russian government officials” or “arising out of payments he received from the Ukrainian government.”

The rest of the scope memo is blacked out.

Last month, following the FBI’s raid of Cohen’s personal properties, and the revelation that it was referred by Mueller’s office, a spokesman for the special counsel referred Fox News to the U.S. Code of Federal Regulation (CFR) Title 28, Section 600.4 regarding “additional jurisdiction.”

That section indicates Mueller could expand the scope with DOJ consent.  “If in the course of his or her investigation the Special Counsel concludes that additional jurisdiction beyond that specific in his or her original jurisdiction is necessary in order to fully investigate and resolve the matters assigned, or to investigate new matters that come to light in the court of his or her investigation, he or she shall consult with the Attorney General, who will determine whether to include the additional matters within the Special Counsel’s jurisdiction, or assign them elsewhere,” the code reads.