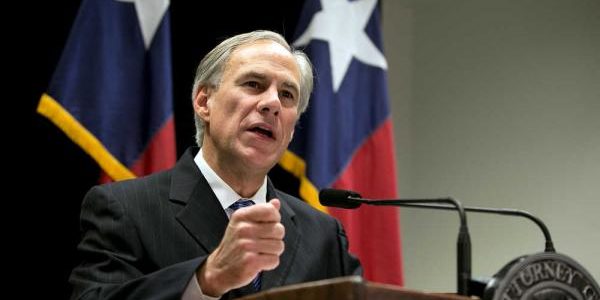 Gov. Greg Abbott on Tuesday called a special session of the Texas Legislature starting July 18. Abbott said that after legislators address a bill to keep some state agencies from shuttering, he’ll add another 19 items to the agenda.

Gov. Greg Abbott on Tuesday called a special session of the Texas Legislature starting July 18 and promised to make it a sweeping one if lawmakers cooperate. Abbott gave legislators an ambitious 19-item agenda to work on — including a “bathroom bill” — but only after they approve must-pass legislation that they failed to advance during the regular session. An overtime round, Abbott said, was “entirely avoidable.”

“Because of their inability or refusal to pass a simple law that would prevent the medical profession from shutting down, I’m announcing a special session to complete that unfinished business,” Abbott told reporters. “But if I’m going to ask taxpayers to foot the bill for a special session, I intend to make it count.”

Lt. Gov. Dan Patrick had been pushing Abbott to call a special session on the bathroom issue, as well as property taxes. Abbott also added the latter item to the call, reiterating his support for legislation that would create automatic rollback elections when a city or county wants to raise property taxes above a certain amount. In an effort to force the special session, Patrick had held hostage legislation, known as a “sunset bill,” that would keep some state agencies from closing. That “will be the only legislation on the special session [agenda] until they pass out of the Senate in full,” Abbott said. In a statement, Patrick congratulated Abbott on his “big and bold special session agenda which solidly reflects the priorities of the people of Texas.” Patrick noted that “almost every issue” Abbott mentioned Tuesday has already passed out of the Senate.

House Speaker Joe Straus, R-San Antonio, offered a more muted response to Abbott’s announcement. “The House looks forward to resuming our work on school finance and other challenges facing this state,” he said in a statement. Democrats unfurled statements condemning Abbott for proposing an agenda that largely appeals to Republican primary voters. “Gov. Abbott’s announcement today simply shows what an ineffective governor and leader he has been,” said state Rep. Chris Turner of Arlington, who chairs the House Democratic Caucus. “After providing zero leadership and interest during the regular session, the governor is clearly panicking and trying to shovel as much red meat as he can to his right-wing Tea Party base.”

The sprawling list of items ranges from unfinished business in the regular session — school finance reform and school choice for special needs students — to longtime conservative priorities, such as anti-abortion measures and a crackdown on mail-in ballot fraud. But the bathroom issue, a priority of Patrick’s that dominated the regular session, is likely to be among the most controversial charges.

“At a minimum, we need a law that protects the privacy of our children in our public schools,” Abbott said, reiterating his support for a proposal that never made it to his desk, House Bill 2899, that would nix existing municipal and school districts’ trans-inclusive bathroom policies and prevent locals from enacting any new policies. The debate over bathroom policies was, in part, what left Abbott to consider a special session. Patrick — who championed strict policies to limit bathroom use to sex at birth — forced the special by holding hostage legislation needed to continue some state agencies, including the Texas Medical Board, which licenses the state’s doctors.

The House, under Straus, refused to go very far on the issue. HB 2899 died in a committee and Straus refused to refer the Senate’s proposal to a committee. The House ultimately voted on a measure limited to schools that some said would do little to prevent administrators from allowing transgender students to use bathrooms that match their gender identity. Under Patrick’s leadership, the Senate rejected that proposed compromise, arguing it didn’t go far enough. That left the presiding officers in a stalemate after Straus said he wouldn’t go any further on the issue because doing so could be detrimental to vulnerable children and damage the state’s economic vitality.

Abbott also put anti-abortion legislation on the docket, including resurrecting Sen. Larry Taylor‘s Senate Bill 20, which would require women to pay a separate premium if they want their health plan to cover an elective abortion. Taylor’s bill would have allowed health plans to cover abortions that are deemed medically necessary. The legislation did not make exceptions for cases of rape or incest. Another item on the list is a bill that would extend the state’s Task Force on Maternal Mortality and Morbidity until 2023. The task force is responsible for studying and providing the state with recommendations on how to curb the rate of mothers dying less than a year after giving birth. Task force members have expressed that they need more time to study causes of deaths among women. Elsewhere on the call are a bill that would increase provider reporting requirements on abortion complications and one that would order medical providers to follow “do-not-resuscitate” requests from patients. Abbott is also asking lawmakers to take up legislation that would prohibit local and state government agencies from contracting with abortion providers and their affiliates. State and federal law already prohibit taxdollars from funding abortion.

Efforts to overhaul the property appraisal and tax rate process fell apart during the regular session after the two chambers couldn’t agree on what constituted meaningful reform. The property taxes that Texas homeowners pay are determined by how much appraisal districts say land and buildings are worth and the tax rates that local government entities like cities, counties and special purpose districts each set. The state is constitutionally prohibited from collecting property taxes, but such revenues largely fund local governments. School districts also collect property taxes, but were not the focus of legislation this year.

State Sen. Paul Bettencourt, R-Houston, authored a bill during the regular session that would have changed how property appraisals are conducted and appealed. His bill also would have required local governments to get voter approval if their proposed tax rate was expected to increase their overall revenues by 5 percent or more. Current law allows voters to petition for such an election if revenues are expected to increase 8 percent or more. The Senate passed Bettencourt’s bill, but that version never made it out of the House Ways and Means Committee. The lower chamber backed an overhaul of the appraisal process and focused on changing how and what Texans are told about property tax rates. It excluded the controversial automatic election provision.

Both “private school choice” and school finance were on Abbott’s special session agenda, as well as bills that would increase teacher pay and flexibility for teacher hiring. A House bill to inject $1.5 billion into public schools and simplify formulas for allocating that money died when the Senate added a “private school choice” provision for special needs students, which the House opposed. Rep. Dan Huberty, R-Houston, also killed a Senate bill that would have formed a commission to study school finance in the interim, arguing legislators didn’t need additional research and should have passed the House reforms.

In calling for lawmakers to crack down on mail-in ballot fraud, Abbott cited a high-profile investigation of mail-in ballot irregularities affecting Dallas City Council races. Examining mail-in balloting would put Texas on a new path for shoring up elections — by addressing a vulnerability that’s actually documented. Lawmakers six years ago passed the nation’s strictest voter photo identification law, a politically contentious measure that federal judges say disproportionately made it tougher for Latino and black Texans to vote. That law only applied to ballots cast in-person, where experts have found scant evidence of widespread trouble. During this year’s regular session, the Legislature did send Abbott an under-the-radar bill that would address one type of mail-in ballot fraud — overhauling voting at nursing homes.

During his announcement, Abbott also said he signed into law several bills from the regular session:

Senate Bill 8 bans the most common second-trimester abortion procedure and requires health care facilities such as hospitals and abortion clinics to bury or cremate fetal remains — whether from abortion, miscarriage or stillbirth. The law also bans facilities from donating aborted fetal tissue to medical researchers and outlaws “partial-birth abortions,” which are already illegal under federal law.

House Bill 62 creates a statewide texting-while-driving ban. However, Abbott warned during his announcement that the bill he signed “did not fully achieve my goals” and called for “legislation that fully pre-empts cities and counties from any regulation of mobile devices in vehicles” during the special session.

House Bill 501 forces elected officials and senior state officials to reveal any financial relationships they have with government entities.

Senate Bill 21 outlines the duties and limitations of Texas delegates should a convention of states to amend the U.S. Constitution happen.

Here are the 20 items on the special session call, as described by Abbott’s office: