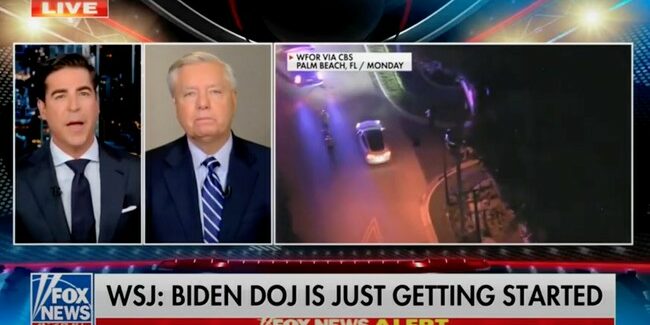 Fox New host Jesse Watters did not hold back his criticisms against Senator Lindsey Graham (R-SC) and Congressional Republican leadership in their tepid response to the FBI carrying out a raid on Mar-a-Lago seemingly over documents that former President Donald Trump had not turned over to the National Archives.

The raid on a former president’s home is unprecedented and answers have yet to be given on if there are more serious reasons for the move by the FBI and Justice Department during an election year. While some GOP members were swift in their condemnation of the raid, leadership took their time in even giving their thoughts on the situation.

“Yeah, no, I got you. I understand exactly what you are saying. I want to come on your show and tell you things that I know aren’t going to happen,” Graham replied. “I can’t make them stop. I can’t urge them and stop the process of normal business in the Senate until we know more. We’re going to have an election in November. You want to stop these people? Fire them. If you want to get a president of the United States that knows what the hell they are doing, pick somebody other than Biden. You are dead right.”

Bruce Reinhart, the federal judge who reportedly approved the FBI’s search warrant to raid Mar-A-Lago, has been vocal in the past on his Facebook about his extreme dislike towards Trump.