Oh, So That’s Why Liberals Are Going to Eat It Over Their ‘DeSantis Is Missing’ Antics 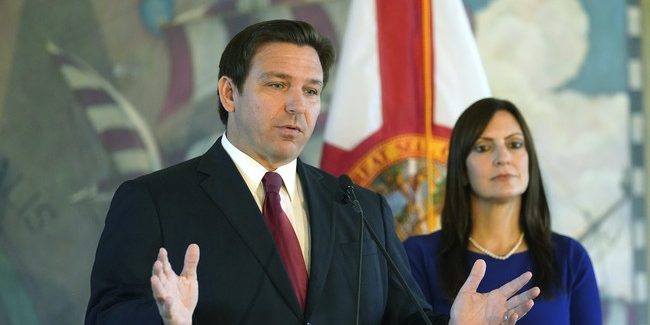 Oh, they hate him. They see him as a threat. He has fought them and won every single time. Besides Trump, there is no Republican out there who has made the liberal media eat more crow over their false narratives. He’s eons ahead of them. He’s cornered them every time. He destroyed the CBS News’ fake news story about Publix and the links between the grocery chain and the distribution of the COVID vaccine. The family who owns it donated to DeSantis. That story was shot more times than 50 Cent, but CBS News didn’t retract the story even after it was disproven by…everyone. So, with COVID spiking again, what is the liberal media doing? Asking where’s Ron? The governor was smeared as being AWOL. He wasn’t. He was with his wife who is undergoing treatment for breast cancer (via NY Post):

Fla. Gov. Ron DeSantis was with his wife as she underwent cancer treatment during a recent COVID-19 surge in his state, his spokesman said.

The same day critics slammed DeSantis as being “missing” while his state was dealing with increased coronavirus cases.

Other critics, including Rep. Alexandria Ocasio-Cortez, D-N.Y., piled on on social media, accusing him of being “inexplicably missing.”

“Hasn’t Gov. DeSantis been inexplicably missing for like 2 weeks,” Ocasio-Cortez wrote in a tweet during a visit to Florida. “If he’s around, I would be happy to say hello. His social media team seems to have been posting old photos for weeks.”

“In the meantime, perhaps I could help with local organizing,” said Ocasio-Cortez, who was pictured without a mask while dining outside in Miami. “Folks are quite receptive here.”

MSNBC host Joy Reid joined in the attack, tweeting, “A governor, not governing during a crisis; and sunning his belly on vacation instead. @GovRonDeSantis is the Nero of Ted Cruzes.”

DeSantis press secretary Christina Pushaw tweeted back at Reid, attaching photos of the governor’s daily schedule, and asked, “Have you ever considered that you’re one of the reasons nobody trusts the media?”

This is gross, but we’ve seen this before. They’re all also quietly hoping for his wife to die because that’s how liberals treat anyone who isn’t like them. They want you to die. That’s why they get all excited when cases are spiking in Florida. The other side is that it’s a virus with a 99 percent survivability rate—and Omicron while insanely contagious is quite mild. No one has died from Omicron in numbers seen in previous waves. Meanwhile, New York is a COVID bastion again. It’s teeming with COVID. It’s overloaded with it—and yet there’s silence from the media on that. Can you take a guess why?