The Pence Walkout: Will Someone Tell The NFL They’re Fighting A Losing War 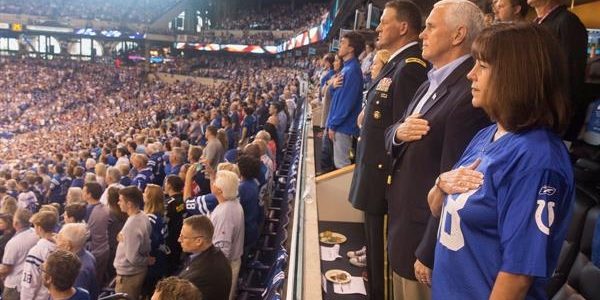 Vice President Mike Pence walked out during a football game because not all the players stood for the national anthem. The Indianapolis Colts played the San Francisco 49ers. Was this expected—the kneeling? Yes. Was it a PR stunt, as 49ers safety Eric Reid said? Maybe—but who cares? We’re treating this as if the NFL and the Trump administration are on equal footing. That’s not the case. The Trump White House is on the right side of this; the polling shows it. The fans’ reactions have shown it. The NFL owners know it. Since Trump weighed in on the anthem protests during games, there have been spikes in refund requests from ticket holders, sales have dropped, and approval has sunk. It’s playing a part in the torpedoing of NFL ratings this season. Colin Kaepernick, who was a quarterback for the 49ers, and his antics are viewed as unpatriotic by 72 percent of Americans. It’s not about the issues. It’s not about free speech. Everyone knows these players have that right, but if this was meant to induce some awareness on police brutality or race relations, that’s lost. The fans, the American people, see one thing: players disrespecting the flag and our troops—those who are veterans and others who are still in uniform. We’re still fighting a war in Afghanistan if you’re still wondering if this is unseemly, which it is.

When you have to explain why you’re doing this, you’re losing. Trump, the fans, and others who are against these antics don’t have to do a damn thing. They don’t have to explain. They’ve already won. The NFL is slowly learning this (maybe not). The NFL Players Association—not so much (via The Hill):

The NFL Players Association released a statement in support of players’ constitutional rights to “peacefully raise awareness” after Vice President Mike Pence walked out of a NFL game Sunday over players kneeling during the national anthem.

“Our men and their families are also conscientious Americans who continue to be forces for good through our communities and some have decided to use their platform to peacefully raise awareness to issues that deserve attention,” the statement read.

“It is a source of enormous pride that some of the best conversations about these issues have taken place in our locker rooms in a respectful, civil and thoughtful way that should serve as a model for how all of us can communicate with each other.

“We should not stifle these discussions and cannot allow our rights to become subservient to the very opinions our Constitution protects. That is what makes us the land of the free and home of the brave.”

There was a multitude of ways to raise awareness for whatever issues these players want to address. They have their social media accounts, interviews, the creation of non-profits, etc., but they wanted to really get the attention in all the wrong ways: by protesting the Star-Spangled Banner. It was a face full of buckshot—and the fans are tired of this crap. This isn’t the hill to die on for any issue because the optics are always going to be bad. Reyes made it worse with his take, by the way:

“This is what systemic oppression looks like. A man with power comes to the game, tweets a couple of things out and leaves the game with an attempt to thwart our efforts. Based on the information I have, that’s the assumption I’ve made.”

Everyone else will see Pence, like Trump, being a cheerleader for America, which is something that’s been absent for nearly a decade. If this was a PR stunt, (if it was I still don’t care), there will be no blowback for the Trump administration. The NFL will continue to get slapped by this though.