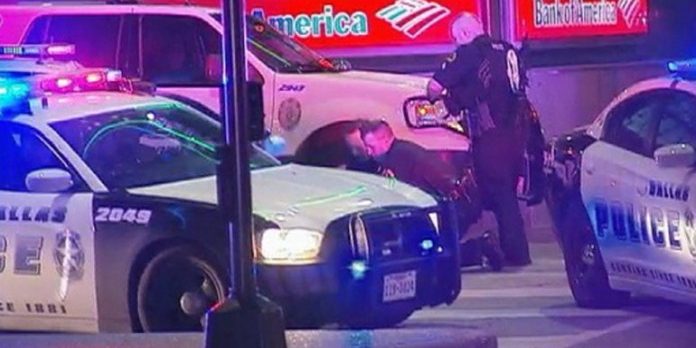 Five Dallas police officers were killed and seven wounded by a sniper who “wanted to kill white people” during an anti-police brutality protest Thursday, an explosion of violence that President Obama declared a “vicious, calculated and despicable attack on law enforcement.”

Three people were in custody and one suspect dead as local police and federal authorities raced to determine a motive and whether more people were involved in what was the nation’s deadliest day for police since 9/11. The suspects were not cooperating, officials said.

“We’re hurting,” said Dallas Police Chief David Brown in a Friday morning news conference. “Our profession is hurting. Dallas officers are hurting. We are heartbroken. There are no words to describe the atrocity that occurred to our city. All I know is this must stop, this divisiveness betweeen our police and our citizens.”

The protest was one of several around the country, prompted by police shootings of black men in Louisiana and Minnesota.

Brown said the dead suspect, who barricaded himself in a parking garage and negotiated with police for several hours, told authorities he was angry about police shootings.

Initial reports said there was more than one sniper, but at the news conference, Brown indicated the dead suspect may have been the sole gunman. Although he told police he was “not affiliated” with anyone else, three others were in custody.

A woman was taken into custody near the garage and two men seen packing a camouflage bag into a Mercedes before speeding from the scene were apprehended and detained, the mayor said.

A Dallas police source estimated to Fox News that at least 60 rounds were fired over a “large kill zone.” The source added that the shooting would have required considerable planning.

The suspect was killed when police sent a robot into the area in the El Centro Community College parking garage to detonate a bomb after negotiations went nowhere. Before he died, he had claimed that explosives had been set around the city, and much of downtown Dallas was locked down while police searched before determining there were no bombs.

“It’s a heartbreaking moment for the city of Dallas,” Mayor Mike Rawlings said. “I ask that everybody focus on one thing right now, and that is Dallas police officers, their families, those that are deceased [and] those that are in the hospital fighting for their lives.”