Trump, Clinton trade blows on terror and guns in wake of Orlando attack 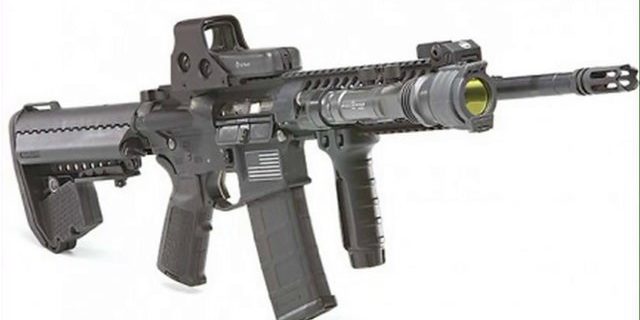 While investigators try to piece together what led the Orlando gunman to carry out an unspeakable act of terror, the attack is upending the 2016 campaign debate as the two presumptive rivals go toe-to-toe on terror with two very different messages.

In back-to-back speeches Monday, Donald Trump doubled down on his call for a Muslim immigration ban while decrying what he described as a “deadly ignorance” that is hurting the country — and Hillary Clinton renewed her call for an assault-weapons ban while vowing to stop “lone wolf” terrorists.

Trump, speaking in New Hampshire, focused largely on his plans for an immigration crackdown. Trump said he wants to “suspend immigration from areas of the world where there is a proven history of terrorism” against the U.S. or its allies.

“We have no choice,” Trump said of the proposed ban. It wasn’t immediately clear whether Trump was revising his long-standing proposal to temporarily bar foreign Muslims entering the U.S., which he also defended, or referring to the same plan.

The New York businessman also called the Orlando shooting “an assault on the ability of free people to live their lives, love who they want and express their identity.”

“It we don’t get tough, and we don’t get smart – and fast – we’re not going to have a country anymore – there will be nothing left,” Trump said.

Trump, speaking at St. Anselm College, was quick to slam his Democratic rival, claiming she “is in total denial” and that her ultimate plan is to “disarm law-abiding Americans” while admitting immigrants who could pose a threat.

A few hours earlier at her speech in Ohio, Clinton called for an “intelligence surge” and a ban on assault weapons as part of a multi-pronged strategy to confront homegrown terrorism.

The presumptive Democratic presidential nominee, following the Orlando terror attack, called on Americans to fight terrorism at home with “clear eyes” and “steady hands.” She delivered a carefully calibrated message, calling for America to get tougher on terrorists while also renewing gun control proposals that have failed to gain steam in Congress.

At the Cleveland campaign event, she drew cheers from the crowd after calling for a ban on assault weapons.

“Weapons of war have no place on our streets,” Clinton said.

Clinton also said if she were in the White House, a top priority would be “identifying and stopping lone wolves,” like the Orlando shooter.

She also called for increased efforts to remove Islamic State messages from the Internet and said “peace-loving Muslims are in the best position to help fight radicalization.”

Trump’s speech was originally supposed to focus on his case against the Clintons – but Trump changed his focus following the attack in Orlando that left 49 people dead and dozens injured. The gunman died in a shootout with police.

On Monday, President Obama said investigators believe the gunman was not directed by external extremist groups, instead saying the shooter “was inspired by various extremist information that was disseminated over the Internet.”

He added that there is “no direct evidence” the shooter “was part of a larger plot.”

Clinton warned earlier Monday against demonizing an entire religion, saying doing so would play into the hands of the Islamic State group.

“We can call it radical jihadism, we can call it radical Islamism,” Clinton said on CNN’s “New Day.” “But we also want to reach out to the vast majority of American-Muslims and Muslims around this country, this world, to help us defeat this threat, which is so evil and has got to be denounced by everyone, regardless of religion.”

The horrific shooting consumed the White House race just as Trump and Clinton were fully plunging into the general election. It served as a reminder to the candidates and voters alike that the next president will lead a nation facing unresolved questions about how to handle threats that can feel both foreign and all too familiar.

Trump said Monday he was revoking the press credentials of the Washington Post after the newspaper published an article with a headline “Donald Trump suggests President Obama was involved with Orlando shooting.”

“Based on the incredibly inaccurate coverage and reporting of the record setting Trump campaign, we are hereby revoking the press credentials of the phony and dishonest Washington Post,” Trump posted on his Facebook page.

Authorities identified the killer in Orlando as Omar Mateen, a 29-year-old American-born Muslim. FBI officials said they had investigated him in 2013 and 2014 on suspicion of terrorist sympathies but could not make a case against him.

Mateen opened fire at the Pulse Orlando club with an AR-15 semi-automatic rifle. He called 911 during the attack to profess his allegiance to the Islamic State terrorist organization though it was unclear whether he had any direct contact with ISIS or was just inspired by them.