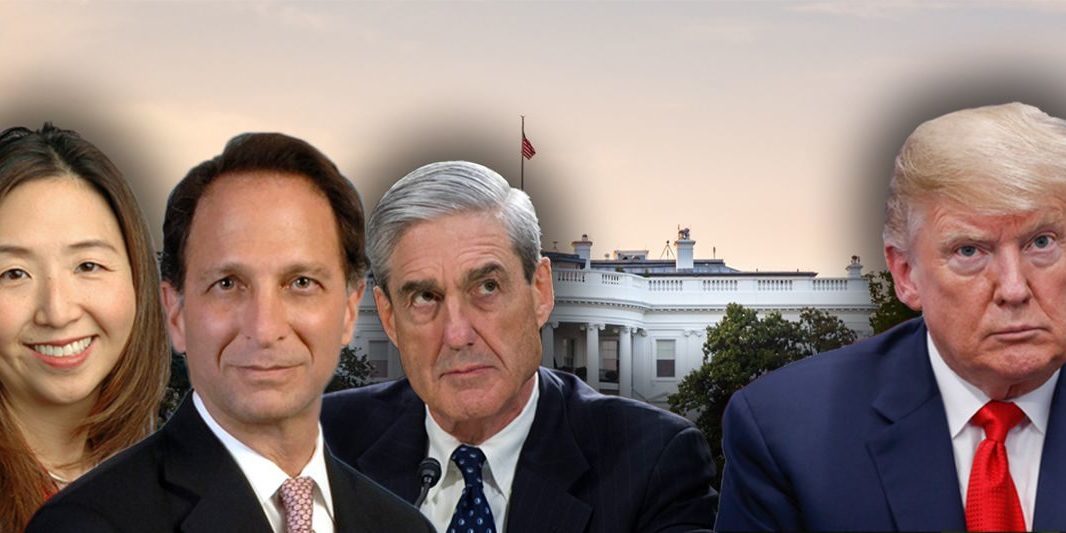 President Trump launched a broadside early Friday at Special Counsel Robert Mueller’s entire team of investigators ahead of major filings in the Russia probe, alleging a slew of internal “conflicts of interest” and suggesting all those controversies should be included in the final report. After maintaining a relatively low profile on social media amid this week’s services for the late President George H.W. Bush, Trump roared back into the Russia probe debate with a blistering battery of pre-dawn tweets. “Robert Mueller and Leakin’ Lyin’ James Comey are Best Friends, just one of many Mueller Conflicts of Interest. And bye the way, wasn’t the woman in charge of prosecuting Jerome Corsi (who I do not know) in charge of ‘legal’ at the corrupt Clinton Foundation?” Trump tweeted, again calling the probe a “total Witch Hunt.”

The president, for months, has blasted Mueller and former FBI Director James Comey suggesting they have a very close relationship. The two have worked together for years—dating back to at least 2003, when Mueller was FBI director and Comey was deputy attorney general.

Meanwhile, “the woman” Trump claims is overseeing the potential prosecution of Corsi, an ally of GOP political operative Roger Stone, is likely Jeannie Rhee, a federal prosecutor on Mueller’s team. Rhee is a former partner at WilmerHale—the high-profile law firm where Mueller worked prior to taking on the special counsel role. Fox News reported earlier this year that Rhee had represented the Clinton Foundation in 2015 in a racketeering suit brought by conservative legal activist group Freedom Watch in 2015. Rhee also represented former Secretary of State Hillary Clinton in a lawsuit seeking access to her private emails. Trump’s apparent criticism of her was just the start. “Will Robert Mueller’s big time conflicts of interest be listed at the top of his Republicans only Report. Will Andrew Weissman’s horrible and vicious prosecutorial past be listed in the Report,” he continued. “He wrongly destroyed people’s lives, took down great companies, only to be overturned, 9-0, in the United States Supreme Court. Doing same thing to people now. Will all of the substantial & many contributions made by the 17 Angry Democrats to the Campaign of Crooked Hillary be listed in top of Report.”

“Will the people that worked for the Clinton……Foundation be listed at the top of the Report? Will the scathing document written about Lyin’ James Comey, by the man in charge of the case, Rod Rosenstein (who also signed the FISA Warrant), be a big part of the Report? Isn’t Rod therefore totally conflicted?” He continued: “Will all of the lying and leaking by the people doing the Report, & also Bruce Ohr (and his lovely wife Molly), Comey, Brennan, Clapper, & all of the many fired people of the FBI, be listed in the Report? Will the corruption within the DNC & Clinton Campaign be exposed?..And so much more!”

Trump has repeatedly blasted Mueller’s team for being filled with “Angry Democrats.” The majority of prosecutors in the special counsel’s office are registered Democrats or have a history of making political donations to Democratic candidates and causes. Andrew Weissmann, who reportedly has been the prosecutor grilling former Trump campaign chairman Paul Manafort, has overseen controversial prosecutions in the past that ultimately resulted in dismissed convictions and allegations of prosecutorial misconduct. Former U.S. Attorney Joseph diGenova, a Trump ally, called Weissmann “one of the most unethical prosecutors to ever be in the Justice Department.”

Meanwhile, the president, once again, attacked his deputy attorney general, Rod Rosenstein, who appointed Mueller after assuming oversight of the Russia investigation amid former Attorney General Jeff Sessions’ recusal. Justice Department official Bruce Ohr, who allegedly was a key player regarding the controversial anti-Trump dossier — which was paid for by the Clinton campaign through law firm Perkins Coie and commissioned by opposition research firm Fusion GPS — has also come under scrutiny in recent months. Ohr’s wife, Nellie, not “Molly” as the president tweeted, has worked for Fusion GPS.

The president’s tweets come as Mueller faces a court-imposed Friday deadline to file potentially revealing memos outlining how former Trump campaign chairman Paul Manafort allegedly broke his cooperation agreements with the government, as well as how his former longtime personal attorney Michael Cohen should be punished for lying to Congress in 2017 about an abandoned Trump real estate project in Russia. The Cohen charge, though, was part of a newly announced plea deal, and the ex-Trump lawyer is said to be cooperating extensively with Mueller. The planned submissions are set to come just days after Mueller’s office submitted a heavily redacted sentencing memorandum indicating that fired national security adviser Michael Flynn also had provided “substantial assistance” with several ongoing investigations and recommending no prison time. Trump attorney Rudy Giuliani called Mueller’s prosecutors “sick puppies” in the wake of that filing.

Meanwhile, fired FBI Director James Comey is slated to testify behind closed doors before the House Judiciary Committee Friday morning, after dropping his longshot legal challenge to congressional Republicans’ subpoena earlier this week when they agreed to make public a transcript of his remarks.

Fox News has confirmed that a key focus of questioning will be Comey’s decision to write the July 2016 statement recommending against filing criminal charges in the Hillary Clinton email probe before the former secretary of state was even interviewed, as well as the apparent political bias demonstrated in a slew of text messages and leaks by top FBI officials. Republicans are also expected to ask about the comparably favorable treatment afforded by the FBI to Clinton advisers. In October, U.S. District Court Judge Royce Lamberth said he was “shocked” and “dumbfounded” when he learned that FBI had granted immunity to former Clinton chief of staff Cheryl Mills during its investigation into the use of Clinton’s server, according to a court transcript of his remarks.