Trump To Schumer: Oh, I’ll Shut Down The Government Over Border Security (And Unlike You, I’ll Probably Win Chuck) 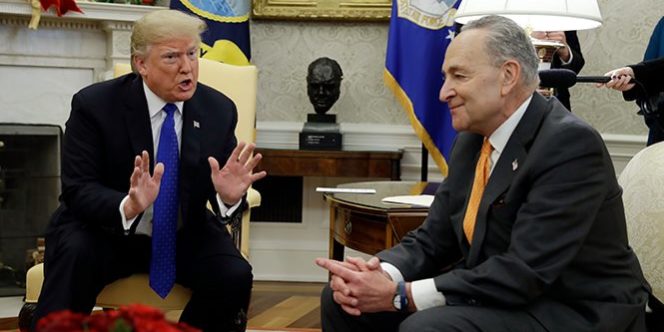 Fireworks erupted in the White House today over border security. President Trump met with Senate Minority Leader Chuck Schumer and Nancy Pelosi—and it went off as expected. There were jabs traded over the recent midterm election, but the issue over the border wall remains the one that divides both parties, and you saw in it raw form with this meeting. This is why we elected Trump, folks. He’s a fighter—and this exchange only made me want to vote for Trump more in 2020.

The stunning public spat, during which Schumer accused the president of throwing a “temper tantrum,” ended with no resolution and appeared to increase the chances of a partial government shutdown at the end of next week.

The three leaders pointed fingers, raised their voices and interrupted each other repeatedly as they fought over policy and politics. Schumer lectured Trump that “Elections have consequences, Mr. President.” Trump claimed that, because she is working to nail down the votes to become speaker, “Nancy’s in a situation where it’s not easy for her to talk right now.”

Pelosi answered: “Please don’t characterize the strength that I bring to this meeting.”

“We came in here in good faith and we are entering into this kind of a discussion in the public view,” she said during the meeting’s public portion. Pelosi and Schumer both implored Trump not to shutdown the government. Trump initially said he didn’t want a shutdown either but in the end announced that he did.

“We believe you shouldn’t shut it down,” Schumer said. Trump wants $5 billion for the wall in 2019 while Democrats are offering only $1.3 billion — a gulf that showed no signs Tuesday of getting bridged. The meeting occurred several hours after House Republicans dug in on their demand for $5 billion in support of Trump’s stance.

Trump was clear. If he doesn’t get what he wants on border security, he’ll shut it down—and that he’ll be proud to shut it down. The president also took a swipe at Schumer, who shut down the government over illegal aliens in January of 2018. Democrats tried to force Republicans to vote on DACA protections, but didn’t expect tock solid unity from the GOP caucus on this front. The messaging suffered as well, wavering from ‘the GOP shut down the government’ and ‘it’s worth shutting down D.C. for illegals.’ It was a mess. After a couple days, with polls showing Democrats could be blamed for the maneuver, and the media calling out shoddy Democratic talking points, Shutdown Chuck caved. Trump made sure to let Schumer know that if he shut it down, he wouldn’t blame him. He added that the last time Schumer shut down the government, it didn’t work. A not so subtle jab suggesting the president knows he’s in it to win a shut down fight–and on this issue, he probably would.

As Katie wrote, it was explicitly clear that Chuck and Nancy didn’t want this tit-for-tat on live television.

“I don’t think we should have a debate in front of the press on this,” Pelosi said.

We’ll see what happens, but remember that Schumer didn’t have the stomachto keep the government shut down last time—and Trump probably know this. He should run the table and demand the full $25 billion for the wall. There is nothing to lose here, folks. Be aggressive.