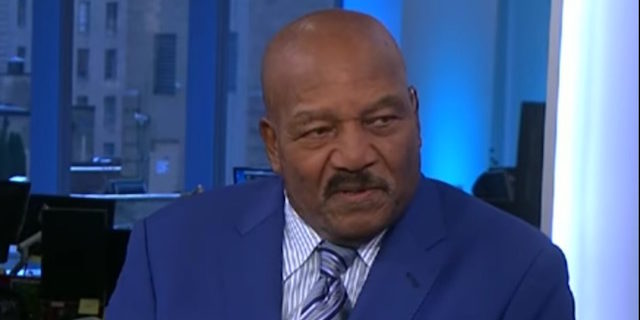 Leah wrote up Jim Brown’s rave review of his meeting with Donald Trump yesterday, in which he said he’d “fallen in love” with the president-elect over the course of their discussion about improving the lives of African-Americans. Brown’s gushing assessment of Trump got a fair amount of media play — and understandably so, given his prominence and support for Hillary Clinton in the election — but I didn’t want another portion of Brown’s CNN appearance to fall through the cracks. Anchor Brooke Baldwin put up a full-screen graphic of Trump’s emerging cabinet and noted that a majority of those faces belong to older white men. Yes, there are some women and racial minorities on the team, she allowed, but most are not. “Does that bother you?” she asked. With a hat tip to Mary Katharine Ham, who brought this to my attention, Brown’s gracious and moving reply speaks for itself. Remarkable:

“I’ve lived all my life in America, and I’m 80 years old. So I have seen discrimination at its worst. I understand slavery. I study history. The only thing I have always done, I’ve tried to make sure that I was a decent person, and that I worked outside of myself to make things better. So I don’t always look at black and white. But I’m going to say this to you, and I don’t ever say this: The three greatest people in my life were white. Okay? My high school coach, my high school superintendent, and my mentor. In Manhassett, Long Island. I never had a father, really. My great-grandmother raised me. But I was in this country where I got help from people that were not of my same color. So when I come out of the box, I don’t come out of the box as racial. I look for good people, and people that will be like-minded and help me try to do good for other human beings. So that’s truly where I’m coming from.”

What an extraordinary testimony from an 80-year-old black man who has lived through a lot in this country. Dr. Martin Luther King Jr.’s dream of a society that judges men and women by the content of their character, rather than the color of their skin, may still seem like a distant goal in our age of reflexive identity politics and ongoing inequities. But people like Jim Brown show that the torch of MLK’s dream remains very much alight.  Bravo, and God bless.