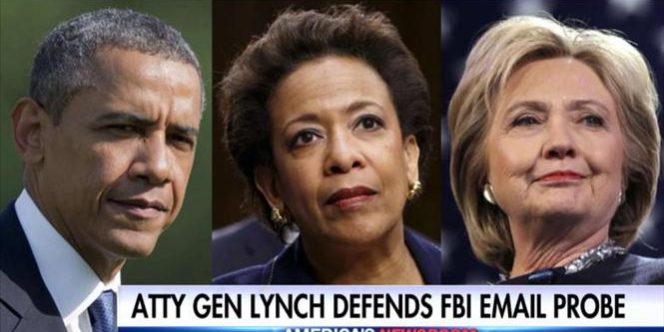 Lost in all the shouting and hypocrisy over James Comey and the FBI’s renewed investigation into Hillary Clinton’s national security-compromising email scandal is a true jaw-dropper of a Wall Street Journal scoop regarding deep internal divisions within the Bureau and DOJ. The story begins by focusing on the email probe side of the controversy, then delves into great detail about a raging, under-the-radar battle over multiple FBI field offices examining possible criminal wrongdoing at the Clinton Foundation. The specifics of the report are remarkable, with warring factions offering differing accounts of what has really transpired. One thing that becomes clear from the Journal’s reporting is that some within the FBI believe top brass at their agency and at the Justice Department have repeatedly exerted their influence to hamstring or shut down a serious criminal investigation:

New details show that senior law-enforcement officials repeatedly voiced skepticism of the strength of the evidence in a bureau investigation of the Clinton Foundation, sought to condense what was at times a sprawling cross-country effort, and, according to some people familiar with the matter, told agents to limit their pursuit of the case. The probe of the foundation began more than a year ago to determine whether financial crimes or influence peddling occurred related to the charity. Some investigators grew frustrated, viewing FBI leadership as uninterested in probing the charity, these people said. Others involved disagreed sharply, defending FBI bosses and saying Mr. McCabe in particular was caught between an increasingly acrimonious fight for control between the Justice Department and FBI agents pursuing the Clinton Foundation case…

Early this year, four FBI field offices—New York, Los Angeles, Washington and Little Rock, Ark.—were collecting information about the Clinton Foundation to see if there was evidence of financial crimes or influence-peddling, according to people familiar with the matter…The FBI field office in New York had done the most work on the Clinton Foundation case and received help from the FBI field office in Little Rock, the people familiar with the matter said. In February, FBI officials made a presentation to the Justice Department, according to these people. By all accounts, the meeting didn’t go well. Some said that is because the FBI didn’t present compelling evidence to justify more aggressive pursuit of the Clinton Foundation, and that the career anticorruption prosecutors in the room simply believed it wasn’t a very strong case. Others said that from the start, the Justice Department officials were stern, icy and dismissive of the case.

Let’s pause right there.  Remember this August report about an active FBI probe into the Clinton Foundation, which was pooh-poohed as unsubstantiated at the time?  Apparently, it had quite a lot of validity to it.  Also recall that those rumors began to swirl shortly after an element of the Obama Justice Department was alleged to have rebuffed an FBI request to look into the Clintons’ controversial family charity.  Those headlines came and went rather quickly, but it turns out that there was a heavy duty tug-of-war underway beneath the surface.  One contingent of agents views their bosses at DOJ as actively trying to deep-six their investigative efforts, which could have further damaged the Clintons.  Another contingent believes the evidence wasn’t strong enough to justify a full-scale investigation.  Back to the Journal’s piece:

Anticorruption prosecutors at the Justice Department told the FBI at the meeting they wouldn’t authorize more aggressive investigative techniques, such as subpoenas, formal witness interviews, or grand-jury activity. But the FBI officials believed they were well within their authority to pursue the leads and methods already under way, these people said. About a week after Mr. Comey’s July announcement that he was recommending against any prosecution in the Clinton email case, the FBI sought to refocus the Clinton Foundation probe, with Mr. McCabe deciding the FBI’s New York office would take the lead, with assistance from Little Rock…The Washington field office, FBI officials decided, would focus on a separate matter involving Mr. McAuliffe…Within the FBI, the decision was viewed with skepticism by some, who felt the probe would be stronger if the foundation and McAuliffe matters were combined. Others, particularly Justice Department anticorruption prosecutors, felt that both probes were weak.

The decision to keep pursuing the Clinton Foundation did not sit well with at least one high-ranking DOJ boss, who placed an angry phone call to McCabe — whose name may sound vaguely familiar.  More on that connection in a moment, but first, this smacks of improper political pressure:

“Are you telling me that I need to shut down a validly predicated investigation?” Mr. McCabe asked, according to people familiar with the conversation. After a pause, the official replied, “Of course not,” these people said. For Mr. McCabe’s defenders, the exchange showed how he was stuck between an FBI office eager to pour more resources into a case and Justice Department prosecutors who didn’t think much of the case, one person said. Those people said that following the call, Mr. McCabe reiterated past instructions to FBI agents that they were to keep pursuing the work within the authority they had. Others further down the FBI chain of command, however, said agents were given a much starker instruction on the case: “Stand down.” When agents questioned why they weren’t allowed to take more aggressive steps, they said they were told the order had come from the deputy director—Mr. McCabe. Others familiar with the matter deny Mr. McCabe or any other senior FBI official gave such a stand-down instruction. For agents who already felt uneasy about FBI leadership’s handling of the Clinton Foundation case, the moment only deepened their concerns, these people said.

It sounds as if McCabe was caught between DOJ higher-ups who wanted the Clinton Foundation probe jettisoned or significantly defanged, and line agents who were angry and suspicious that their work was being undermined by a political agenda. Did agents on the case hallucinate the effective “stand down” order they received?  Was the decision to back off wrongly attributed to Mr. McCabe? He is an interesting figure, as it was recently revealed that Virginia Governor Terry McAuliffe — a very close Clinton ally, and the subject of yet another FBI probe — funneled $675,000 to the the State Senate campaign of McCabe’s wife, a liberal Democrat.  Even if Mr. McCabe did his best to abide by ethical guidelines, his central involvement in all of these politically-charged matters at least looks questionable, given his family’s very recent partisan alliance with Clintonworld.  And then there’s this:

In September, agents on the foundation case asked to see the emails contained on nongovernment laptops that had been searched as part of the Clinton email case, but that request was rejected by prosecutors at the Eastern District of New York, in Brooklyn. Those emails were given to the FBI based on grants of partial immunity and limited-use agreements, meaning agents could only use them for the purpose of investigating possible mishandling of classified information. Some FBI agents were dissatisfied with that answer, and asked for permission to make a similar request to federal prosecutors in Manhattan, according to people familiar with the matter. Mr. McCabe, these people said, told them no and added that they couldn’t “go prosecutor-shopping.”

McCabe apparently denied agents’ September request to seek non-government laptops seized from Clinton aides during the (then dormant) email scandal investigation. Relevant FBI/DOJ-granted immunity deals, described by ex-federal officials as highly irregular, stipulated that the evidence in question could only be used by officials looking into the mishandling of classified data — not other potential crimes related to the Clinton Foundation.  Hmmm.  Layer all of this new information atop the facts that Attorney General Loretta Lynch improperly huddled with Bill Clinton while the email probe was still active and then broke her word by inserting herself into the case, pressuring Comey not to update Congress on new developments that impact his previous testimony.  Asking tough pointed about whether some top officials at DOJ are abusing their roles to protect their partisan allies is justified.