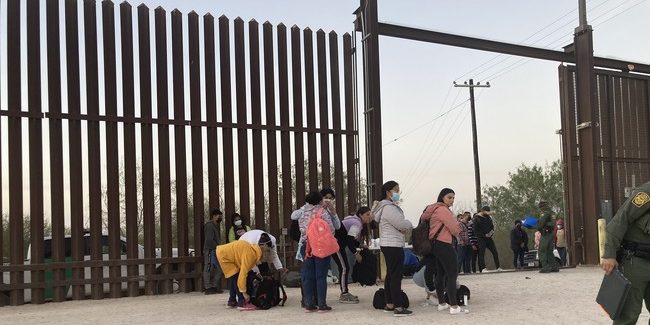 It’s no secret that the Biden administration has failed to address the illegal immigration crisis along the U.S.-Mexico border, and at every turn has taken what seems to be the worst action available to them. Rather than addressing the border crisis, U.S. Citizenship and Immigration Services (USCIS) changed their mission statement on Wednesday to seemingly institutionalize Joe Biden’s open-borders agenda by removing mention of “lawful immigration,” “protecting Americans,” or “securing the homeland.”

According to an archived version of the USCIS core values page, its old mission read:

U.S. Citizenship and Immigration Services administers the nation’s lawful immigration system, safeguarding its integrity and promise by efficiently and fairly adjudicating requests for immigration benefits while protecting Americans, securing the homeland, and honoring our values.

But as of Wednesday morning, the page was updated with its new, Biden-ized mission statement, and the agency’s director tweeted out what the administration seems to think is a good idea and use of government resources and manpower.

“This new mission statement reflects the inclusive character of both our country and this agency,” claimed USCIS Director Ur M. Jaddou. “USCIS is committed to ensuring that the immigration system we administer is accessible and humane,” she added — without mentioning anything about being committed to ensuring America’s immigration system is legal or just.

According to USCIS, their repositioning is “a reflection” of the Biden administration’s priorities, which is unsurprising given Biden’s avoidance of action to stop illegal immigration or enforce America’s sovereignty. His administration stopped construction of the border wall, indulged a hoax and limited the ability of border agents to patrol vast swaths of the border, monopolized agents’ time with processing and transporting illegal immigrants, and changed policies to avoid deporting many criminals who are in the U.S. illegally.

Regardless of whether updating their mission statement was an attempt to look busy while doing nothing to actually improve legal immigration or a blatant attempt at institutionalized leniency toward illegal immigration, USCIS’ mission change is just another example of how misguided the Biden administration and Democrats’ handling of immigration has become.