Biden Had a Call With the Ukrainian President. It ‘Did Not Go Well.’ 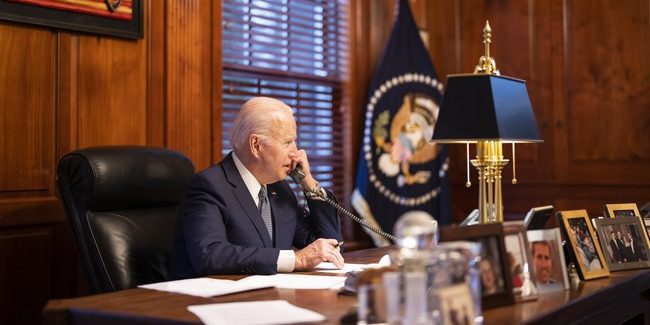 During a phone call Thursday afternoon, Ukrainian President Volodymyr Zelensky reportedly told President Joe Biden to tone down the messaging as he continued to claim Russia was going to invade the country. The call is being described as one that “did not go well.”

My sources in Zelensky’s office say this is relatively accurate regarding what Biden said. But Zelensky disagreed with the US assessment. Sources also told me this week US has no definitive timeline for a Russian attack, and weather here now is too warm. FWIW… 33F. https://t.co/Z173vbBlWm

A senior Ukrainian official says the Biden-Zelensky call ‘did not go well’ and Biden told Zelensky a Russian invasion is virtually certain warning the country should prepare for impact @mchancecnn reports pic.twitter.com/SzBxdRBSHc

The White House is pushing back on this interpretation of the call but has not released a transcript. The National Security Council released the following read out of the conversation.

President Joseph R. Biden, Jr. spoke today with President Volodymyr Zelenskyy of Ukraine. President Biden reaffirmed the readiness of the United States along with its allies and partners to respond decisively if Russia further invades Ukraine. He also underscored the commitment of the United States to Ukraine’s sovereignty and territorial integrity. President Biden noted the United States has provided Ukraine with over half a billion dollars in development and humanitarian assistance in the last year, and is exploring additional macroeconomic support to help Ukraine’s economy amidst pressure resulting from Russia’s military build-up. President Biden made clear that despite the departure of American family members of embassy personnel, the U.S. Embassy in Kyiv, remains open and fully operational. The leaders discussed coordinated diplomatic efforts on European security, underscoring the principle of “nothing about Ukraine without Ukraine.” President Biden relayed the United States’ support for conflict resolution efforts in the Normandy Format, expressing his hope that the sides’ recommitment on January 26 to the terms of the July 2020 ceasefire will help decrease tensions and advance the implementation of the Minsk Agreements.

Earlier this week Ukrainian officials criticized the State Department’s directive for family members of U.S. diplomats to depart Kyiv, saying it was a premature overreaction.

In recent weeks President Biden, administration officials and the U.S. intelligence community have increasingly indicated Russia will invade Ukraine in a matter of weeks. The Ukrainian government has maintained an invasion is not imminent and President Zelensky has repeatedly encouraged his people to remain calm and put panic aside.