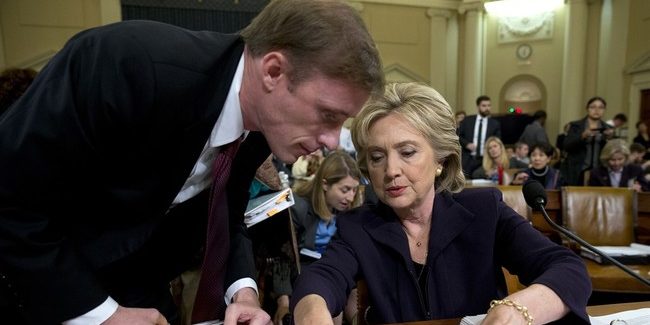 President Biden’s National Security Advisor Jake Sullivan hasn’t had a great run in the White House over the last year — from absurd claims about the fate of Afghanistan’s government to attempts to cover for Biden’s botched withdrawal to more recent briefings about the escalating tensions between Russia and Ukraine — he’s proven to be little more than a partisan hack who expects everyone to believe what he says without question.

Even Sullivan’s recent claims about Russia’s actions and intentions as Putin’s troops amass along the border have been questioned skeptically by mainstream reporters who normally show deference to the Biden administration. But now it’s something Sullivan said back in 2016 while he was senior policy advisor to Hillary Clinton’s doomed presidential campaign that raises questions about his credibility and ought to call into question his qualifications and trustworthiness as Biden’s NSA.

As Vespa reported over the weekend, there’s a new bombshell from the Durham probe that shows Hillary Clinton’s campaign lawyers paid a tech company to “infiltrate” servers at Trump Tower and then at the White House in order to tie President Trump to Russia as they sought to construct a narrative to cover for the fact that Hillary Clinton was a terrible candidate without a hope of winning the 2016 election.

Well, here’s what Biden National Security Advisor Jake Sullivan — then Hillary for America’s Senior Policy Advisor — said in reaction to a hit piece in Slate titled “Was a Trump Server Communicating With Russia?” as he took a lead role in pushing the narrative.

This could be the most direct link yet between Donald Trump and Moscow. Computer scientists have apparently uncovered a covert server linking the Trump Organization to a Russian-based bank.

This secret hotline may be the key to unlocking the mystery of Trump’s ties to Russia. It certainly seems the Trump Organization felt it had something to hide, given that it apparently took steps to conceal the link when it was discovered by journalists.

This line of communication may help explain Trump’s bizarre adoration of Vladimir Putin and endorsement of so many pro-Kremlin positions throughout this campaign. It raises even more troubling questions in light of Russia’s masterminding of hacking efforts that are clearly intended to hurt Hillary Clinton’s campaign. We can only assume that federal authorities will now explore this direct connection between Trump and Russia as part of their existing probe into Russia’s meddling in our elections.

Hillary’s account then tweeted the statement and the hit job was complete.

Funny how that works. The senior policy advisor for Hillary’s campaign says an alleged link discovered between Trump Tower and a Russian bank is part of Trump’s “adoration” of Putin while Hillary’s campaign lawyers were paying a tech company to infiltrate Trump’s servers in an attempt to tie Trump to Putin. And Americans are expected to trust what Sullivan says about Russia today as it stands armed to the teeth at Ukraine’s border? Right.