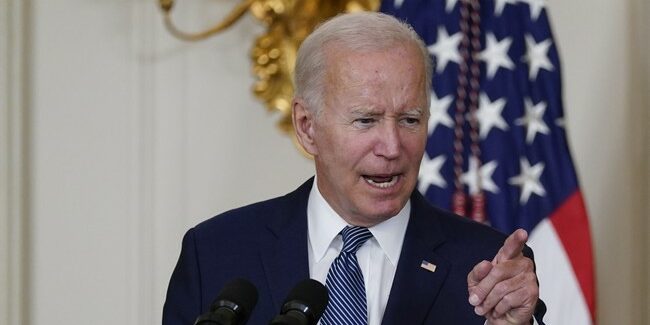 The American economy shrunk at -0.6 percent in the second quarter of 2022 according to Thursday’s revised estimate released by the government’s Bureau of Economic Analysis.

As BEA’s release explains, “The GDP estimate released today is based on more complete source data than were available for the “advance” estimate issued last month” and “primarily reflects upward revisions to consumer spending and private inventory investment that were partly offset by a downward revision to residential fixed investment.”

The first GDP estimate for Q2 was released on July 28 and showed negative growth, -0.9 percent, for the period — that report made the Biden recession official by meeting the definition of two consecutive quarters of negative economic growth after real GDP decreased -1.6 percent in the first quarter. Thursday’s number only confirmed that the United States, under Biden’s “build back better” economic agenda, is in a recession.

That confirmation of a U.S. economy in recession comes as the Federal Reserve kicks off its meeting in Jackson Hole after levying a record-setting four consecutive increases to interest rates and inflation continues to run at a rate that outpaces wage growth by multiple percentage points. Needless to say, Chair Jerome Powell will face a tough crowd when he addresses central bankers in Wyoming on Friday.

Meanwhile, back in Washington, the Biden administration just announced action on federal student loan debt that will come at a cost of more than $300 billion to American taxpayers while adding more inflationary pressure to the economy and Democrats recently passed their falsely named “Inflation Reduction Act” that’s another pile of steaming-bad policy set to land another hit on the struggling economy.