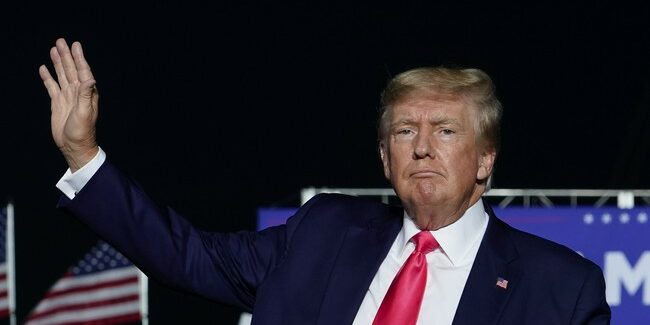 We have an update on when the National Archives asked for the documents in question from Trump, but it doesn’t matter. The agency asked for the records considered missing back in 2021. Every development on the FBI’s raid on Mar-a-Lago seems to carry a common theme. There’s nothing conclusive. We don’t even know the evidence that gave the Justice Department probable cause to raid the property. Parts of the affidavit will be released today, soaked in black ink from the redaction process. Federal agents raided the home of former President Donald Trump on August 8, and there isn’t anything that alludes to a crime.

We have many follow-up stories about how the Trump and National Archives’ legal teams duked it out over the documents. Still, the media treats these updates as groundbreaking, akin to what ‘Deep Throat’ said to Bob Woodward in a Rosslyn parking lot (via WaPo):

“It is also our understanding that roughly two dozen boxes of original presidential records were kept in the Residence of the White House over the course of President Trump’s last year in office and have not been transferred to NARA, despite a determination by Pat Cipollone in the final days of the administration that they need to be,” wrote Gary Stern, the agency’s chief counsel, in an email to Trump lawyers in May 2021, according to a copy reviewed by The Washington Post.

Cipollone was the former White House counsel designated by Trump as one of his representatives to the Archives. A spokeswoman for Cipollone declined to comment Wednesday.

Stern, the chief counsel at the Archives, does not say in the email how he determined that the boxes were in Trump’s possession. He wrote that he also had consulted another Trump lawyer during the final days of Trump’s presidency — without any luck. “I had also raised this concern with Scott in the final weeks,” Stern writes in the email, referring to Trump lawyer Scott Gast, who is also copied on the email.

In the email, Stern again asks for the documents from Trump’s residence to be returned.

Stern’s email to three Trump lawyers takes an almost pleading tone at times. Cipollone is not copied on the email, which is sent to Gast and two longtime Cipollone deputies.

Stern cites at least two high-profile documents that the Archives knew at the time were missing — letters from North Korean leader Kim Jong Un and a letter from former president Barack Obama at the beginning of Trump’s presidency.

“We know things are very chaotic, as they always are in the course of a one-term transition,” Stern writes. “ … But it is absolutely necessary that we obtain and account for all presidential records.”

Stern did not state in the email what the Archives believed were in the boxes in the White House residence.

Every day that passes where there’s no smoking gun pointing to a crime is another day confirming what we already know about the intent of this federal ransacking of Mar-a-Lago. It’s a political witch hunt, and as with the Russian collusion fiasco—there is zero evidence to show Trump committed a crime here. He’s a former president who can declassify anything he wants, even if he took sensitive materials—the act of taking them is a declassifying action. No president can ever be charged with mishandling classified materials since the Executive is the ultimate decider on classifying or declassifying certain records. In the Department of the Navy v. Egan case, the Supreme Court was clear about this power of the presidency, which is not subject to the classification statutes.

Some of the seized documents were declassified, others were personal records, and then federal agents took Trump’s passports, exposing this search as not narrowly defined but a dragnet to find anything to indict this man before the 2024 election. They got nothing. As Matt Taibbi, former contributing editor of Rolling Stone who now writes solely on Substack, noted, there’s been a noticeable decrease in coverage about this raid by the media concerning any bombshell illegalities that might be laden in the boxes of documents that were taken from the property. What gives?

While the raid on the home of a former president is historic, what’s even more remarkable is the FBI interfering in not one, not two, but three elections in a row.