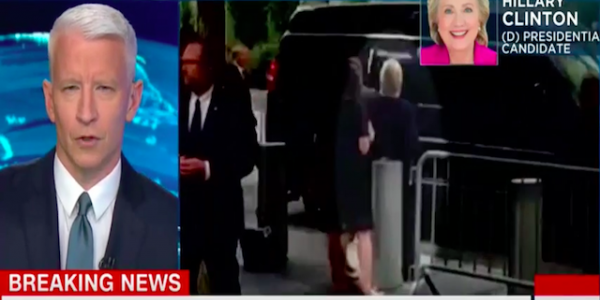 Everyone knows that CNN is the Clinton News Network. That should not surprise anyone that has been paying attention. But CNN has been caught AGAIN altering video footage to make Hillary Clinton’s 9/11 collapse look less severe than it was. In fact, they hide major facts of the situation by manipulating footage.

Sunday morning, Hillary Clinton, experiencing pneumonia, collapsed at the 9/11 ceremony and was literally carried to a covert, ambulance by multiple Secret Service agents. Everyone has seen the actual footage, and it is very scary to see how unstable Hillary is and consider she is very close to becoming the next president of the United States.

While every major news outlet showed coverage of Hillary’s collapse, CNN gave it their best effort to help Hillary’s incident look less severe than it actually was.

On “Anderson Cooper 360” they cut out the most important parts of a video showing Clinton stumbling – and having her feet dragged – into her van after supposedly being overcome with heat exhaustion after a 9/11 commemoration ceremony.

The full video shows the truth, and indicates how severe her health is when she was literally carried into the van and slid into the back seat like a sack of potatoes. Here is the undoctored video: