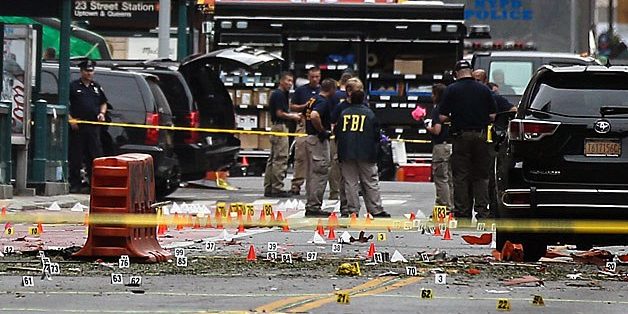 The search for Rahami comes hours after federal authorities on Sunday night conducted a traffic stop in Brooklyn of a “vehicle of interest” in the Chelsea bombing. A law enforcement source told Fox News that a “number of individuals” who are possibly connected to the explosion were taken into custody.

“Today I believe we’re going to find out [the bombing] was being influenced by foreign sources,” Gov. Andrew Cuomo said Monday on “Fox & Friends.”

Law enforcement officials told the Associated Press that at least 5 men were being questioned after the traffic stop. The two officials spoke on condition of anonymity because they were not authorized to talk about an ongoing investigation. The FBI said in a statement that no one had been charged with any crime and the investigation was ongoing.

The FBI had also launched a raid at a building in Elizabeth, New Jersey Monday morning, hours after investigators uncovered five suspicious devices — one of which exploded — near a train station in that city.

An explosive device injured 29 people after a blast in the Chelsea neighborhood of New York City at 8:30 p.m. on Saturday. Police found a second, unexploded device four blocks away. The bombing came just 11 hours after a pipe bomb exploded in a New Jersey garbage can on a charity run route, though that blast injured none.

Authorities haven’t yet officially linked the New York and New Jersey incidents, but said they were looking into the possibility the events were connected.