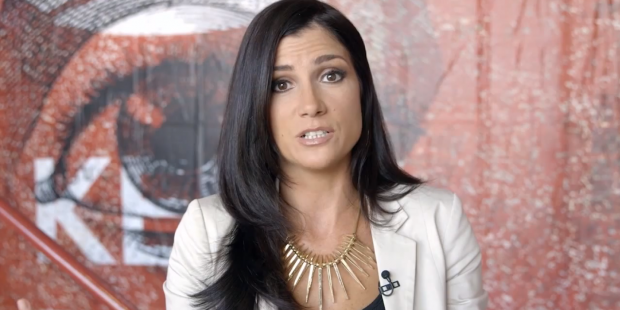 Well, we all knew Katie Couric and Stephanie Soechtig were going to get taken to the woodshed by The Blaze’s Dana Loesch over their controversial anti-gun feature. Under The Gun says it sought to examine the gun control debate by speaking with people from both sides, but you can’t do that when you leave interviews, and the audio from those interviews, on the cutting room floor. And that’s certainly not going to happen when you selectively edit interviews with pro-gun supporters.

The Washington Free Beacon first reported on the eight seconds of silence that followed Couric’s question to members of the Virginia Citizens Defense League about background checks. Of course, we know that to be false—they responded in kind immediately. Soechtig said that the pause was added for people to consider the question. She added that she never intended to make anyone look foolish.

“As a director, she didn’t realize editing out a thoughtful, thorough answer to Couric’s question on background checks by replacing it with awkward silence from her interviewees would make them look bad?” asked Loesch incredulously.

Loesch also unveiled more interesting cuts to the film. Couric and company interviewed Dr. John Lott of the Crime Prevention Research Center, and VCDL president Philip Van Cleave, though both weren’t included in the film, probably because they completely destroyed anti-gun talking points. Also, the film crew took the footage of VCDL members just looking around aimlessly when they asked for silence to capture the ambient noise. That clip was used in the manipulative edit following Couric’s question about background checks to make them look like idiots.

Oh, and as for Couric’s appearance on the Daily Show, where she said 74 percent of National Rifle Association members support universal background checks, it’s kind of hard to know that given that membership isn’t public.

“It is truly a feat of movie magic for that to have actually been credibly surveyed,” said Loesch. She later explained that that figure came from a push poll from Michael Bloomberg that offered vague questions on Second Amendment issues without any information about current gun laws. The NRA did their own survey with their own members and the results were quite different. Soechtig is still stunned that 40 percent of all gun purchases are conducted without background checks. That again has been discredited. After the horrific Sandy Hook shooting, anti-gun groups began to rehash that figure, even President Obama, though The Washington Post, along with other new sources, said that the claim isn’t factual. The survey that led to that inaccurate and ludicrous claim, as Loesch noted, came from just 250 gun owners prior to the inaction of the Brady Handgun Violence Prevention Act in 1993.

That was during a time when gun homicides were at an all-time high. It has since been cut in half, and liberals have to revert to a survey that’s almost a quarter of a century old to justify shoddy anti-gun claims. Also, the sample size is 250, barely enough to gauge a race in a congressional district, definitely not credible enough to suggest a revolutionary national trend.

“Bottom line: this isn’t a documentary. It’s an anti-gun propaganda film presented as one. When you resort to purposefully omitting intelligent points and fabricating percentages to support your crumbling anti-gun narrative, you’re losing—and losing big”

The Second Amendment is on the ballot this year, and we have Hillary Clintonrefusing to say that we have a constitutional right to bear arms. On top of that, a member of the DNC platform committee openly said that she doesn’t feel that anybody should own a firearm.

For gun owners and Second Amendment supporters, the choice for president regarding protecting our oldest civil right couldn’t be clearer, and it’s definitely not Hillary Clinton.