DeSantis to Send Illegal Migrants Who Arrive in Florida to Delaware 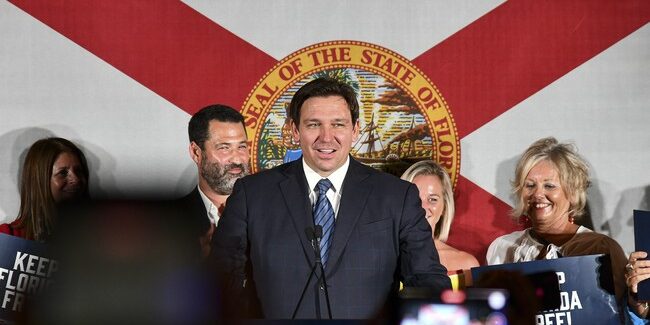 The crisis at the border is getting worse day by day, and yet, the Biden administration continues to turn a blind eye, pretending that the chaos they created is not a problem.

In response, Republican governors are taking it upon themselves to send illegal migrants who wander into their state to Democrat cities so they can see firsthand just how much of a problem it is.

Gov. Ron DeSantis (R-Fla.) is a part of this movement to bring awareness to the crisis at the southern border.   He is vowing to “reroute” illegal migrants who arrive in Florida to President Joe Biden’s home state of Delaware.

“That’s why the governor has worked with the legislature, to secure funding to make sure…that people that are coming illegally…that they don’t stay here with their arms crossed, thinking about what they will be able to do. We are going to send that person, frankly, to Delaware, the president’s home state,” Florida Lt. Gov. Jeanette Nuñez said.

However, DeSantis clarified that this does not apply to refugees escaping communist countries.

“It applies to people illegally crossing the southern border who want to come to Florida or who come to Florida because a lot of them say they want to. And if they’re here illegally, then that’s a much different thing than being a refugee. So it does not apply to refugees,” DeSantis said.

DeSantis called it bizarre to compare people who fled communist Cuba to someone running drugs across the southern border.

“Yes, when you’re putting out tweets saying about Castro’s death, he’s just a political leader that people in Cuba are mourning, that’s a disgrace. That’s an insult to the people in this community who have had to flee that tyranny. It’s an insult to the people that have seen that island destroyed. And here we are decades and decades later, and it is a third-world country has so much potential. And you look at the contrast between South Florida and Cuba. I don’t see people getting on rafts to go from Key West to Cuba. I’ve never seen that. I know they want to do that the opposite because they understand how important freedom is,” DeSantis said.