Trump Was Spotted in DC…and the Left Lost Their Minds 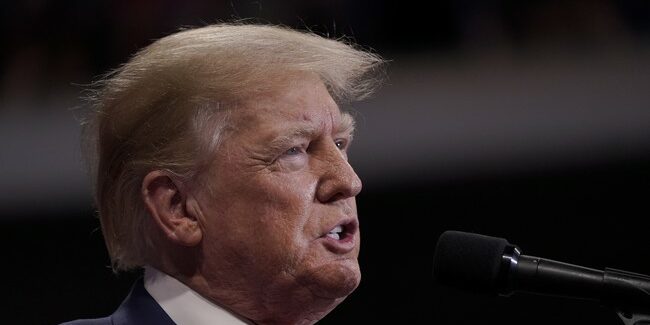 Donald Trump was spotted in Washington, D.C., Monday, and the Left went indiscriminately insane. Every looney left-wing conspiracy theory bubbled up to the surface. The range of liberal hysteria ranged from Trump visiting Walter Reed for a medical emergency to being yanked off the gold course to take his mugshot for the Department of Justice. The only kernel of truth within this claptrap is that Trump was in the nation’s capital and was visiting his golf course. He’s working from that location, so left-wingers who hoped he’d be in handcuffs flanked by two FBI agents—sorry to disappoint (via Newsweek):

Former President Donald Trump has spoken out about his Monday visit to Washington, D.C., amid rampant rumors about his potential arrest or health problems.

Trump was first spotted arriving at Virginia’s Dulles Airport on Monday morning ahead of an unannounced visit to the nation’s capital. This news sparked a wave of speculation online, with many suggesting that the former president was either about to be arrested by the Department of Justice (DOJ) or was set to visit Walter Reed Hospital for medical reasons.

In a post made to Truth Social around noon ET, Trump attempted to dispel rumors, saying that he was visiting the Trump National Golf Course and that he would be “working” there. The reporter who initially broke the story of Trump’s visit, Andrew Leyden, had suggested that was where Trump was headed. It was also backed up by the fact that Trump was in golf wear upon his arrival, though others suggested that this meant that he had made the trip on short notice.

“Working today at @TrumpWashingtonDC on the Potomac River,” Trump wrote on Truth Social, alongside a link to his golf course’s official website. “What an incredible place!”

Our friends at Twitchy wrote about the meltdown, which is now more entertaining than annoying. After so many bullets and attempted fake investigations into the former president, it’s safe to assume the Justice Department has nothing regarding the recent raid on Mar-a-Lago. It’s been over a month, and nothing damning has been unearthed other than the Biden Justice Department has an appalling grasp of the law and the power the president has regarding declassifying records.

How great would it be if Trump’s arrival in DC yesterday was for the unveiling of his Official Mug Shot?

Trump is in DC with his golf shoes on

Which means that he wasn’t able to go home & change

Which means he was plucked from the golf course mid-game

So is this a medical emergency or a legal one?

I know we’re all wondering why Trump is in DC, but did you know that a woman’s right to her own body autonomy has been eliminated by the Supreme Court? #VoteBlueToSaveDemocracy

I have it on good authority and according to someone familiar with the situation, Trump is in DC and might even eat, drink, and use the bathroom while he’s there.

YOU KNOW WHAT THAT MEANS, RIGHT? RIIIIIGHT?!

A part of me thinks that this move to fly to Washington, D.C., and work from Trump National Golf Course was just a troll move by the former president. He knows precisely how his enemies will react and wants to kick the hornet’s nest. He lives rent-free in the minds of liberal America who can’t get over his upset 2016 win, his presidency, his dodging of the investigations into his taxes, his ability to escape the two shoddy Democratic Party-led impeachments, and his perseverance which played a role in debunking the Russian collusion hoax. And they certainly won’t be able to handle his upcoming 2024 presidential run.