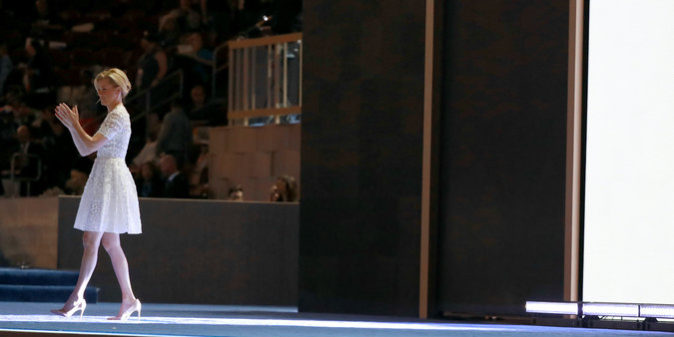 As America watched speaker after speaker on night two at the Democratic National Convention, the podium looked like a hollywood blockbuster movie trailer. The movie title could’ve been  Vote For Hillary Clinton Because She’s A Woman.  Meryl Streep, waxed on about the “struggle”  of being the first woman to do something ground breaking. Celebrity after celebrity took the podium.  Elizabeth Banks (picture above) spoke about her waiting table days and how Planned Parenthood was her only way to get female healthcare. Even Jane Fonda appeared in slickly produced multi generational video montage cover of “Fight Song”.  Well produced video puff pieces  ran between speakers, as if designed to control  and orchestrate the narrative to play out like a Vegas Celine Dion Show, only more ethnically diverse and and with better music.

Her husband, former President Clinton took us through a forty-five minute  family scrapbook speech about his selfless wife and her life long struggle for the underdog. Cue the photo of Hillary with the poor village girls overseas, smiling as if to say look at how much I care. Night two was a very well produced Clinton infomercial high on musicality and celebrity wit, but very low on substance.

All good productions must have quiet on the set. The party of “love trumps hate”  was  less than loving to raucous Bernie Sanders delegates when DNC officials on Monday were reported to have threatened to have their credentials stripped if they didn’t simmer down.