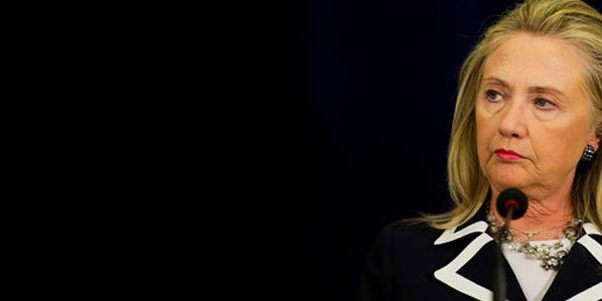 Speaking from the Navy Yard in Brooklyn, New York Tuesday, the location where she last debated opponent Bernie Sanders, Hillary Clinton declared victory and pronounced herself as the Democrat nominee for president of the United States.

“Thanks to you, we’ve reached a milestone tonight,” Clinton said. “I want to thank all of the volunteers, the activists and the organizers who supported our campaign in every state and territory.”

“We all owe so much to those who came before and tonight belongs to all of you,” she continued. “This campaign is about making sure there are no ceilings, no limits on any of us and this is our moment to come together.”

After acknowledging the significance of the moment as the first female Democrat nominee for President, Clinton focused in on her GOP opponent Donald Trump.

“Bridges are better than walls,” Clinton said.  “Donald Trump is temperamentally unfit to be president.”

Clinton concluded her remarks by courting Bernie Sanders voters and urged supporters to get involved.

“Help us organize in all 50 states,” Clinton concluded. “We are stronger together. Lets go out and make that case.”