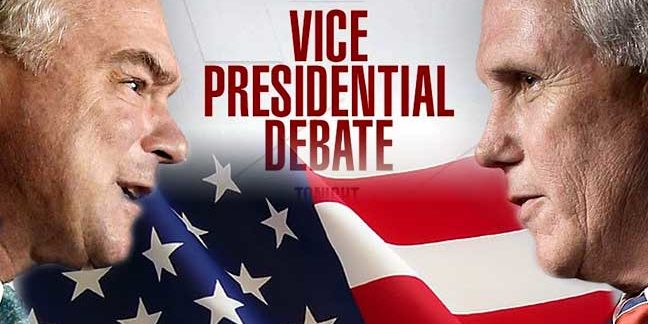 Mike Pence and Tim Kaine scrambled to defend their running mates’ temperament and judgment at their first and only face-off Tuesday night – an unruly 90-minute session in which the vice presidential candidates routinely talked over each other – and the moderator – as they channeled some of the feistiness from last week’s opening presidential debate.

The normally affable candidates sparred on immigration, criminal justice, Social Security, taxes and Russian aggression while accusing each other of running an “insult-driven” campaign. But they clashed most frequently on two topics: Hillary Clinton and Donald Trump.

Pence hammered Clinton over her private email server use as secretary of state and her “feckless” foreign policy, and pressed Kaine to defend Clinton’s honesty and trustworthiness. He also invoked former President Bill Clinton’s recent criticism of ObamaCare and vowed that Trump would repeal the health care law.

Kaine pressured Pence to answer for some of his running mate’s more controversial comments, including praising Russian President Vladimir Putin and  calling for a Muslim immigration ban in the United States. He also said Trump needed to make his taxes public, while ripping the GOP presidential nominee over his coarse language and a “selfish me-first style.”

“I cannot believe that Governor Pence would defend the insult-driven campaign that [Trump] has run,” Kaine said.

Pence countered that Trump’s comments are “small potatoes” compared with Clinton calling half their supporters a “basket of deplorables.”

The exchange was characteristic of the debate, in which the lesser-known, lower-key running mates sparred feistily, leaving moderator Elaine Quijano at times struggling to bring order to the forum.

Kaine challenged Pence on Trump’s decision to break with decades of campaign tradition by not releasing his taxes.

“Donald Trump must give the American public his tax returns to show he’s prepared to be president, and he’s breaking his promise,” Kaine said.

He also hammered Pence over revelations that Trump may been able to avoid paying taxes for up to 18 years by claiming a $900 million loss in 1995.

Pence defended Trump’s tax handling and said his running mate “used the tax code just the way it’s supposed to be used, and he did it brilliantly.” He also asked Kaine:  “Do you not take deductions?”

Though it’s unclear whether Pence and Kaine’s performances dramatically changed voters’ minds about the presidential candidates, the nationally televised debate presented them with the opportunity to energize party loyalists and sway undecided voters.

Kaine and Pence both accused the other of running an “insult-driven” campaign with Kaine calling out Pence for not discrediting Trump’s past “birther” comments about President Obama and saying having Trump in charge “scares us to death.”

Pence shot back, telling Kaine that he and Hillary Clinton “would know a lot about an insult-driven campaign.”

Social issues were a bigger part of the conversation than in the first presidential showdown, reflecting both candidates’ religious faith.

Kaine, a Catholic who personally opposes abortion but has consistently voted in favor of abortion rights, said of the Republican nominee, “Why doesn’t Donald Trump trust women to make this choice for themselves?”

He also pointed to Trump’s assertion that women should face some kind of “punishment” for abortion, a comment Trump later walked back.

Pence stressed his opposition to abortion and said he was “proud to be standing with Donald Trump” on the issue.

Aides to Kaine told Fox News that the former Democratic National Committee chairman is a “policy wonk” like Clinton and studied “big binders” of details to prepare.

Pence, who has a decade of congressional experience under his belt,  had been sharpening his debate skills and preparing for the political showdown since Labor Day.