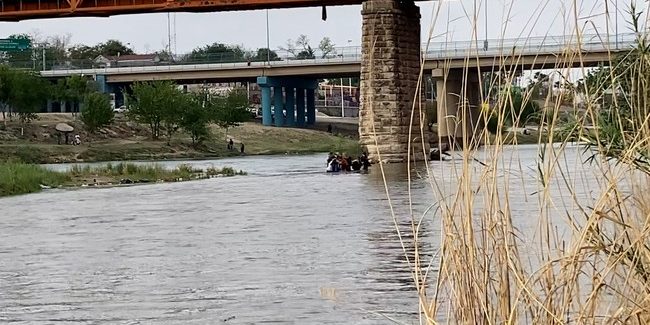 It’s no secret that the U.S.-Mexico border is the opposite of “closed” or under-control as Homeland Security Secretary Alejandro Mayorkas has insisted. In addition to being a national security crisis, Biden’s border crisis is also a humanitarian and public health disaster for Americans as well as migrants trying to take advantage of Biden’s lax immigration posture. The dangerous reality of Biden’s open border policies was hammered home again over the weekend as a migrant drowned trying to illegally cross into the United States.

Fox News’ Bryan Llenas was reporting from the U.S.-Mexico border in Eagle Pass, Texas when, right behind him, several migrants attempted to cross the Rio Grande. One man could be seen clinging for life to a bridge pillar as another man in distress struggled to keep his head above water before disappearing into the fast-moving waters.

*Graphic Video*: A 38 yr-old Nicaraguan man drowned while trying to cross the Rio Grande River into Eagle Pass Texas. Video show his friend holds onto a pillar. National Guard was there. Guardsman told me they’ve been ordered not to do water rescues after SPC. Evans drowned. pic.twitter.com/VWxXW5RrmP

This happened in front of Mexican Authorities, the National Guard and dozens of witnesses. No one went into the water to try to save the man. A guy on the Mexican side finally jumped in but it was too late.

I ran to the river to record. It was traumatic to witness. pic.twitter.com/3B5fpre8al

The tragedy of Biden’s border crisis has only gotten worse since he took office and began rolling back Trump-era policies, and the worst is expected to come if the administration is successful in its planned termination of Title 42 later in May.

Over the weekend, Texas National Guard Spc.  Bishop Evans was laid to rest after he drowned while saving the lives of two migrants illegally crossing into the United States — two individuals who are believed to be drug traffickers.  As Katie highlighted, Biden’s open borders are not the humanitarian effort Democrats claim them to be and, after drawing record numbers of migrants to the United States, Mayorkas and Biden refuse to take responsibility for the deaths of those who attempt to enter the U.S. illegally, nor the human trafficking victims and countless others abused by cartels.